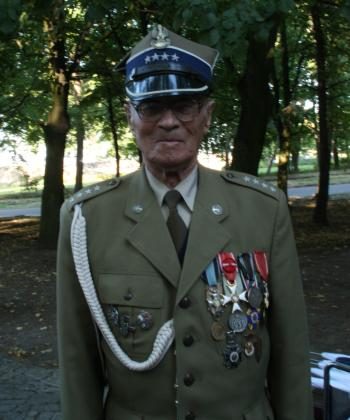 Corporal Ignacy Skowron, 95 year old survivor of the war said that it was worthwhile to fight and suffer to see the day of freedom. (Maria Salzman/The Epoch Times)
Europe

By Marcin Klebba
Print
WARSAW—Over 500 people, according to police estimates, gathered on Friday evening at an Alternative Opening to the Olympic Games event in front of the Chinese Embassy in Warsaw, Poland.

The theme of the event was “China, Wake up!” bringing together a variety of different groups concerned that the opening ceremony of the 2008 Olympic Games would whitewash China human rights concerns.

“Chinese people, we love you,” said Tomasz Kowalski, President of the Falun Dafa Association of Poland, in Polish and Chinese. He explained that Falun Gong practitioners are in solidarity with the people of China, and certainly not against the Olympics.

Event organizers invited practitioners to demonstrate the Falun Gong exercises to the crowd as a stark contrast to contemporary Chinese reality, where doing the movements is likely to land a person in a ‘re-education’ center, labor camp, or prison. Thousands of practitioners have been tortured and killed while refusing to renounce Falun Gong while in detention.

The event was organized by The Other Space Foundation, Save Tibet, and the International Society for Human Rights (ISHR).

Many Tibetan flags were seen at the event, and Tibetan dissidents led repeated chants of “Free Tibet,” and “Olympics without persecution.” Several theatre and musical groups performed throughout the evening.

Chinese Embassy staff were on hand to film and photograph the demonstration, observing the event from the balcony. At one point, there were eight apparent Chinese diplomats invigilating the event.

“Such footage has been used to identify Chinese not aligned with the Chinese regime,” said Jan Jekielek, Poland ISHR representative (who is also a staff member of The Epoch Times). “People have been denied passport renewals, and their families back in China threatened, should they not stop their ‘unpatriotic’ behaviour.”

Several Chinese participated in the Alternative Opening, which is particularly significant in Poland, where most Chinese are in the import/export business and highly dependent on the Embassy.

As darkness came, the demonstration marched around the Chinese Embassy compound, arriving back in front of the building to a centerpiece of Olympic circles constructed with burning funeral candles. The marchers carried photos of people persecuted or killed in Chinese custody since the Olympics were awarded to Beijing, later placing them in the circles.

The event was completely non-violent, and dispersed after 10pm without incident.