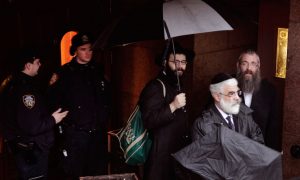 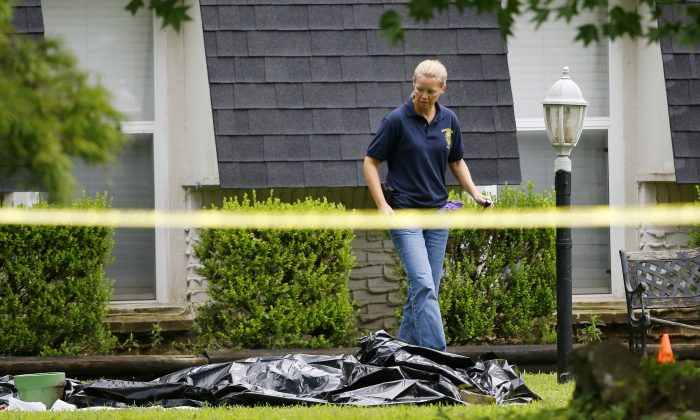 An investigator walks past a tarp covering a body in the front yard of a house in Broken Arrow, Okla., Thursday, July 23, 2015. (AP Photo/Sue Ogrocki)
Crime and Incidents

BROKEN ARROW, Okla.—Police in Oklahoma say they have turned to social media posts for clues about the motive of a teenager accused in the stabbing deaths of his parents and three siblings during a late-night attack that left bodies strewn through the family’s home.

A booking document filed by police in the Tulsa suburb of Broken Arrow accuses Robert Bever, 18, of five counts of first-degree murder and a count of aggravated assault in the attack Wednesday night.

Bever’s 16-year-old brother also was being held. Because he is a juvenile, officers have not released his name or announced charges against him. Broken Arrow Police Cpl. Leon Calhoun said both brothers were cooperating with the investigation.

Dustin Diamond Murder Charges? Nope, Screech from ‘Saved by the Bell’ Not Charged in Stabbing Case; No Death Either

Calhoun said Friday that the agency was still looking for a motive and was searching social media accounts that they believe belong to Bever. Those include community site Pinterest and a Facebook account.

On Pinterest, Bever showed an interest in Star Wars, the rock group Linkin Park and sports cars. A Facebook post lists him as a recent graduate of Citizens’ High School, which describes itself as providing “a home-school curriculum” for people hoping to earn a college degree.

The dead include his parents, David Bever, 52, and April Bever, 44. The Oklahoma State Medical Examiner’s Office on Friday also identified the three dead siblings as Daniel Bever, 12; Christopher Bever, 7; and Victoria Bever, 5. An unidentified 13-year-old sister was in serious but stable condition in a hospital and an unnamed 2-year-old sister wasn’t harmed and was placed in state custody.

By many neighbors’ accounts, the Bevers kept out of sight and to themselves — the kids played alone in the backyard, walked down neighborhood streets bunched together and their parents didn’t socialize much. That appeared to carry over to the father’s work.

David Bever’s former co-workers in the IT department at Samson Resources described him as a quiet man who kept to himself.

“He was a nice guy, but we weren’t close,” said Lisa Wolfe, Bever’s supervisor at Samson. “I hired him. He worked for us for several years as a contractor. He was a good worker and a nice guy. He didn’t get involved in any office politics, and those are the kind of people I like to work with.

“He liked to do his work and focus on that. He didn’t socialize a lot with the folks he worked with,” Wolfe said.

Documents filed to support the teenager’s arrest said a caller from the home was able to tell police “their brother was attacking their family.” Police had said Thursday that the 911 call was silent. Calhoun said the agency would release audio on Monday.

After officers arrived at the home, “officers could hear a faint voice from inside asking for help” and found the 13-year-old bleeding from multiple stab wounds, the affidavit said.

The young girl was still alive and made statements to the officers that “her brothers” were responsible for the attack, it said.

Fresh footprints in the backyard led officers to a wooded area, where they found the brothers.

Dustin Diamond, AKA Screech From ‘Saved by the Bell,’ Charged in Stabbing

A neighbor of the family, Matt Jacobsen, on Friday described the 16-year-old as a follower, not a leader, and “nerdy,” given his interest in computers and technology. Others in the subdivision noted the family seemed isolated to the point that they appeared to avoid community events.

David Bever’s sister, Tamela Massey of Seminole, Florida, said her family is dealing with grief following the death of her brother and members of his family and that they do not know what may have triggered the tragedy.