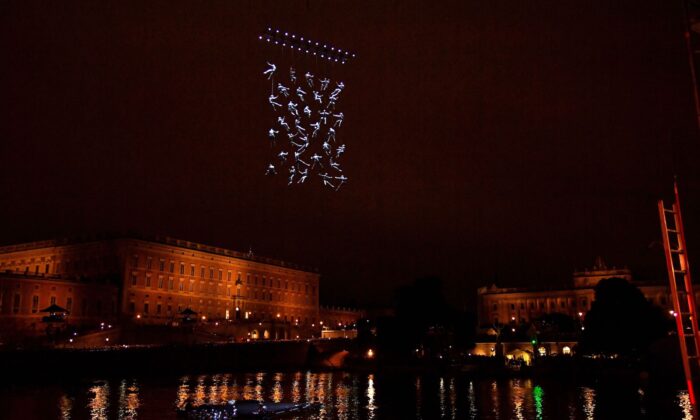 Performers from the Aquanauts with Circus Cirkor, take part in an act as they hang over the middle of the Lilla Vartan waters running between the Royal Opera and Stockholm Palace as part of the Stockholm's Cultural Festival on Aug. 14, 2018. (Anders Wiklund/AFP via Getty Images)
Europe

Police: Bag Found at Stockholm Festival Had an Explosive

STOCKHOLM—A bag with an explosive charge was found in a Stockholm park during an annual cultural festival and police have opened a preliminary investigation into attempted public destruction, police in Sweden said on Monday.

On Sunday, a bag was found and its content was immediately “assessed as dangerous.” The surrounding area was cordoned off and traffic was temporarily rerouted, police said. A bomb squad neutralized the content of the bag on the spot.

“It is only after the investigation at the national forensic center that we can say whether the dangerous object was functional,” said Erik Åkerlund, local police manager.

The police department said it was working “widely,” interviewing witnesses and examining photo and video images. At the moment no one is in custody.

Police said the bag was found at 9:40 p.m. Sunday. The Aftonbladet newspaper said it was left near the Cafe Opera, a famous nightclub.

The five-day Stockholm Culture Festival ended Sunday with a concert by Iranian pop singer Ebi, whose real name is Ebrahim Hamedi and who is a known Iranian dissident. The free festival included musical acts, activities and performances in six areas across the Swedish capital.