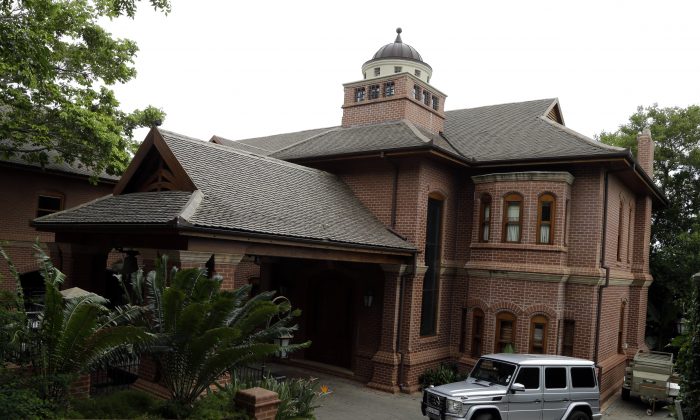 Pistorius at Uncle’s Mansion After Being Released From Jail

JOHANNESBURG—Oscar Pistorius was with his family at his uncle’s mansion Tuesday after the Olympic athlete who killed his girlfriend was released from prison under cover of darkness and moved to house arrest a day earlier than expected.

“Oscar is here, and Oscar is at home with the family,” said Anneliese Burgess, the spokeswoman for the Pistorius family, addressing dozens of reporters outside Arnold Pistorius’ home in Waterkloof, an upmarket suburb of South Africa’s capital Pretoria.

“The family is happy that Oscar is at home,” Burgess said.

Pistorius, the double-amputee runner who fatally shot Reeva Steenkamp in 2013, was moved from a central Pretoria jail on Monday night when he had been expected to be released on Tuesday.

He left the jail at 7:30 p.m. local time, the Department of Corrections said, and appears to have slipped unnoticed by media into the three-story, red-bricked home that stands behind ornate black gates.

The murder trial of Pistorius generated intense international interest. The surprising decision to release Pistorius a day early, and at night, appeared to have avoided the spectacle and logistical challenges caused by a large gathering of TV crews and other journalists hoping to catch a glimpse of Pistorius on the way out of prison, nearly a year to the day after he was sent to jail.

Pistorius has served a year of a five-year sentence for manslaughter for killing Steenkamp. Under South African law, he is eligible to serve the remainder under correctional supervision, a form of house arrest.

The decision to release the 28-year-old Pistorius early was only communicated to his family at short-notice, Burgess said. Confirming Pistorius’ release, South Africa’s Department of Corrections said that the decision over when and how an offender is released is made by the prison.

“The handling of the actual placement is an operational matter of the local management, and how they handle it is their prerogative that is carried out in the best interest of all parties concerned,” Manelisi Wolela, a spokesman for the corrections department, said in a cellphone text message.

Burgess was surrounded by reporters and camera crews — many of whom had camped out at the house overnight — when reading a prepared statement outside Arnold Pistorius’ house on Tuesday morning. Pistorius will be under house arrest at the grand home with lush, landscaped gardens and a large, cross-shaped swimming pool. Many ambassadorial residences line the street.

Apparently responding to criticism that Pistorius’ release after just a year in prison was too lenient, Burgess said Pistorius’ sentence “has not been shortened or reduced.”

“He now enters the next phase of his sentence. He will serve this under the strict conditions that govern correctional supervision,” she said.

Under South African law, an offender sentenced to five years or less in jail can be released to correctional supervision after serving one-sixth of the term — in Pistorius’ case 10 months.

The full conditions under which Pistorius must live for the next four years have not been released by the corrections department and Burgess would not detail them on Tuesday. Only two conditions for Pistorius’ house arrest were previously made public: Pistorius must continue to undergo psychotherapy while under house arrest and he is not allowed to handle any firearms.

Typically, offenders under correctional supervision can only leave their home for specific reasons, like to attend church or to do grocery shopping. They generally cannot leave the house at night. Pistorius will not be required to wear an electronic tagging device.

Pistorius would “strictly adhere to” the conditions of his release, Burgess said, and his family would “support him.”

Pistorius was acquitted of murder last year for the Valentine’s Day shooting death of Steenkamp, but prosecutors have appealed the trial verdict of culpable homicide, or manslaughter, and will seek a murder conviction again at South Africa’s Supreme Court on Nov. 3.

If Pistorius is convicted of murder by a panel of five judges at the appeal, he faces going back to prison for 15 years, the minimum sentence for murder in South Africa, which no longer has the death penalty.

Pistorius has maintained that he thought Steenkamp was an intruder in his Pretoria home and killed her by mistake. Prosecutors said he shot her intentionally during an argument after she fled to a bathroom stall.

Following a suggestion by South Africa’s minister of justice that Pistorius should meet with the parents of his slain girlfriend, Tania Koen, the lawyer for Steenkamp’s parents, said they would be open to that.

However, “the timing would have to be right,” Koen told the AP. The proper time would be after Pistorius’ case is heard by the Supreme Court, Koen said, and “he (Pistorius) would have to initiate it.”

On the day she was killed by Pistorius, Reeva Steenkamp was due to give a speech on domestic abuse at a school. Her mother will on Wednesday deliver that same speech at a school in the Steenkamps’ home town of Port Elizabeth, Koen said.

Pistorius, known as “Blade Runner” for his carbon-fiber running blades, gained worldwide fame when he ran against able-bodied athletes at the 2012 London Olympics, the first amputee runner to compete at the games.

Wolela, the correctional services department spokesman, had previously not ruled out ultimately allowing Pistorius to return to training, although it’s unclear if Pistorius has the desire to revive his once-inspiring athletics career.