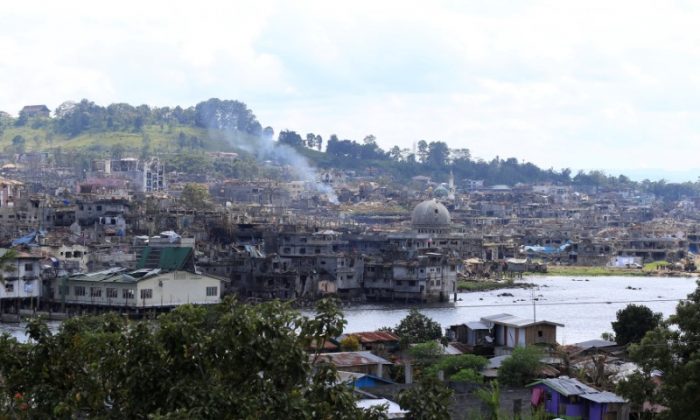 Philippines Declares Siege by Islamic Terrorists Over in Marawi City

CLARK, Philippines–The Philippines declared an end on Monday to five months of fierce urban warfare in a southern city held by pro-ISIS terrorists, a battle that has marked the country’s biggest security crisis in years.

Defence Secretary Delfin Lorenzana said combat operations had been terminated, after troops prevailed in the last stand against gunmen who clung on inside several buildings in the heart of Marawi.

Military spokesman, Major General Restituto Padilla, confirmed there was still gunfire in the city, but there were “no more terrorists” in Marawi. He did not elaborate.

Padilla said the troops tried to convince the remaining terrorists to surrender, but they refused. Two wives of fighters were among those killed.

The siege has stunned the Philippines and stoked wider concerns that ISIS loyalists have ambitions to make the Muslim areas of the island of Mindanao a base for operations in Southeast Asia.

Those fears are compounded by the terrorists’ ability to recruit young fighters, stockpile huge amounts of arms and endure 154 days of ground offensive and government air strikes that have devastated the city.

The armed forces chief General Eduardo Ano said at least 42 bodies of terrorists were found on Monday in two buildings and a mosque in the battle zone.

The military has made significant gains in retaking Marawi in the week since Isnilon Hapilon, ISIS’s “emir” in Southeast Asia and Omarkhayam Maute, a leader of the Maute terrorist group, were killed in a nighttime operation.

Another leader and possible bankroller of the operation, Malaysian Mahmud Ahmad, was likely killed also, the military said.

Lorenzana said there would be other military operations and six battalions of troops would remain in Marawi. He did not elaborate on those operations.