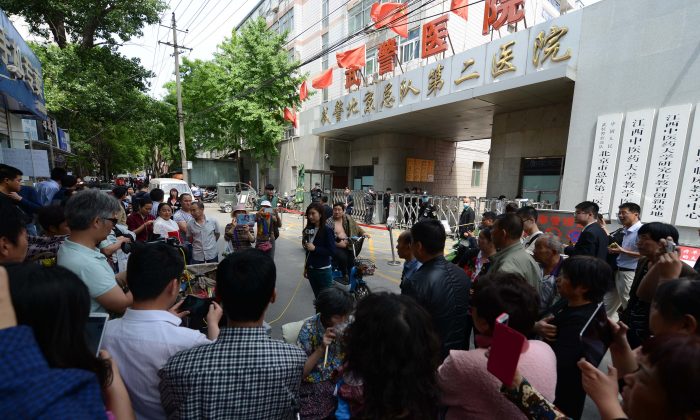 A crowd gathers outside the Second Hospital of the Beijing Armed Police Corps on May 4, 2016. (Epoch Times)
China

The Chinese regime’s paramilitary force has started giving up its business projects—a move that could have a consequential impact on a severe human rights violation that is still on-going in China.

On November 15 in the city of Jinan, the capital of Shandong Province in eastern China, the People’s Armed Police held a meeting about its progress in exiting its variety of business ventures, according to Xinhua, the official news agency. The meeting was officially given the awkward title of: “A summary of the disposition of the comprehensive cessation of compensated service work.”

The meeting said that the Chinese paramilitary has already cancelled a total of 1,903 projects, including hospitals, real estate deals, and other entertainment and accommodation projects.

According to Wang Bing, the vice commander of the Armed Police, getting the force out of these business arrangements is an “important political task,” which has been “placed in an important position to be forcefully rolled out and implemented.”

The number of “medical cooperation projects” that have been cancelled is 375, according to the short announcement. It is unclear how many of these projects are hospitals.

The move to exit the business industry was ordered by Xi Jinping, the leader of the Chinese regime, earlier in the year, and covers the People’s Liberation Army also. The move is in line with Xi’s broader reforms to remove the bloat and scope for corruption in the armed forces.

The People’s Armed Police is an internal paramilitary force the size of a standing army, and numbers around 1.5 million personnel as of a few years ago. It has traditionally been used by local officials to suppress mass protests and perform border patrol work.

There is also, however, another potentially significant political and human rights component to the the People’s Armed Police being forced to exit its business interests, including the running of hospitals.

According to independent researchers, hospitals run and affiliated by the Armed Police appear to have been heavily involved in organ harvesting. Armed Police hospitals can operate with little oversight from the civilian sector, and can establish lucrative secret relationships with prisons and other detention facilities.

Researchers believe that the majority of organs removed for transplantation in China have come from prisoners of conscience. In a nearly-700 page report earlier this year, three investigators estimated that the number of transplants conducted in China has been as high as 100,000 annually, and that the group most targeted are practitioners of Falun Gong, a spiritual discipline that has been persecuted in China since 1999.

It is unclear if the retreat of the People’s Armed Police and the People’s Liberation Army from running hospitals will actually lead to the cessation of this form of abuse in China.