Ashton Carter on Deck for Secretary of Defense
0 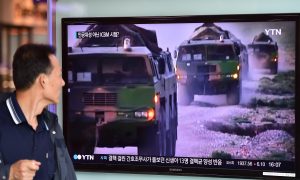 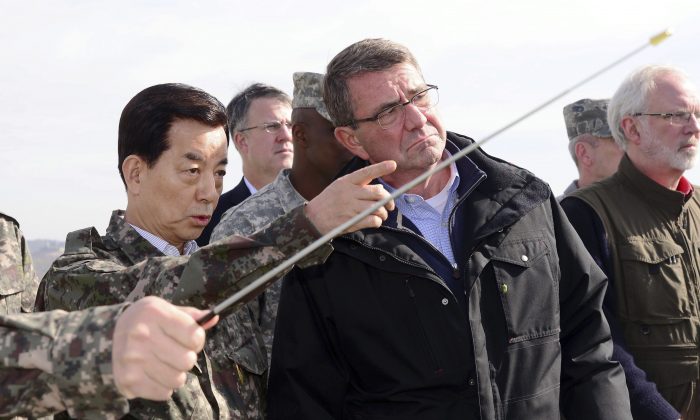 PANMUNJOM, Korea—U.S. Defense Secretary Ash Carter called on North Korea to shrink and eventually eliminate its nuclear weapons program, while acknowledging during a visit Sunday to the Demilitarized Zone dividing the two Koreas that prospects for reconciling with the defiant North are dim.

“For now what we have is what you see beyond us—a very starkly divided and heavily defended border area,” Carter told reporters as he stood on the South Korean side of a marker inside the DMZ that forms the de facto border. Several yards to his rear was the start of North Korea’s portion of the zone, which amounts to a buffer meant to keep the peace even though the two Koreas are technically still at war.

Carter’s first stop near the DMZ was a reminder of long-simmering tensions. His helicopter alighted at Camp Bonifas, named for Arthur Bonifas, an Army captain killed in a DMZ ax attack by North Korean soldiers in August 1976, along with Army 1st Lt. Mark Barrett. Carter was then driven to Observation Post Ouellette, just yards from North Korea’s side; South Korean officers gave him the lay of the land.

At Panmunjom, the village where the July 1953 armistice was signed pausing the Korean War, Carter, flanked by U.S. and South Korean soldiers, looked across the line dividing the Koreas and then turned to tell reporters the U.S. alliance with South Korea is “iron clad.”

“Being here shows you up close how dangerous this part of the world is,” he said.

A U.N. coalition led by the United States fought on South Korea’s side during the 3-year war against a North Korea backed by China and the Soviet Union. No peace treaty was ever signed, and the border area is considered one of the most heavily armed in the world.

They should be on a path of doing less, and ultimately zero, in the nuclear field.
— Ash Carter, U.S. Defense Secretary

It was Carter’s first visit to the DMZ as defense secretary and marked the start of a weeklong Asia tour that also will take him to Malaysia.

Asked whether he saw any reason for optimism about getting North Korea off its nuclear path, Carter noted that the communist country’s leadership is largely a mystery to Washington. He called on the North to avoid provocations and to carry out steps to end its nuclear program, as envisioned in talks it held from 2003 to 2009 with the United States, China, Russia, Japan and South Korea.

The North, believed to already possess a small number of nuclear weapons, has since stated that it would never return to the six-party talks.

“They should be on a path of doing less, and ultimately zero, in the nuclear field,” Carter said.

On Monday, Carter was to attend an annual security conference with South Korean defense leaders in Seoul. The talks were expected to focus on Seoul’s progress in developing the military capacity believed necessary to no longer require the Americans to command South Korean forces in the event of a North Korean invasion.

The South Koreans were to have taken the responsibility for wartime command of its forces several years ago but talked the U.S. into delaying the transfer indefinitely while it seeks to improve several aspects of its military.