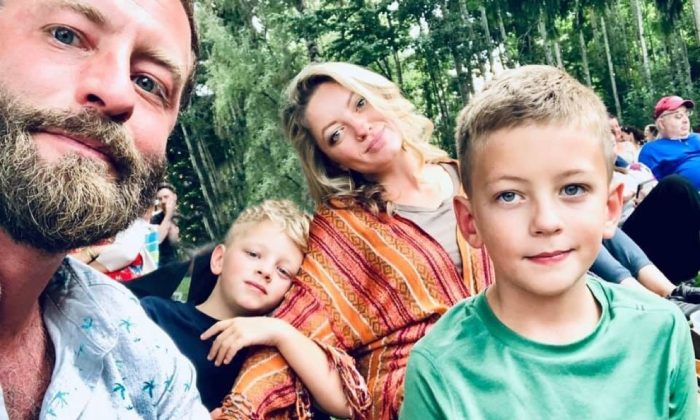 Wiley (R) at his first concert about three weeks before he died. (Courtesy of J.R. Storment)
US News

“Hug your kids. Don’t work too late. A lot of the things you are likely spending your time on you’ll regret once you no longer have the time,” J.R. Storment, the father of twins, wrote recently in a social media post.

He urged parents to spend more time with their kids after one of the twin boys died suddenly in the middle of the night.

The condition is commonly found in boys between the ages of 8 and 13 and mostly resolves itself by the time they become teenagers.

Storment said there wasn’t a kind of epilepsy that could explain why Wiley died, and added that these deaths are categorized as sudden unexplained death in epilepsy (SUDEP).

‘Sleeping in Had Lasted Too Long’

Mother Jessica Brandes, a physician, wrote on LinkedIn that she was suspicious when Wiley didn’t wake up and start playing.

Brandes said she saw his brother Oliver playing on his iPad next to Wiley, while Wiley was “sleeping” under his blanket.

She noticed that Wiley’s feet appeared to have an unusual color.

“That was the moment. The moment I knew what was coming next,” the mother wrote. “My eyes tracked up his legs as I pulled the blanket back and I traced the deep purple color of lividity.”

She wrote that the change of color indicated to her that Wiley had been dead for at least eight hours. Storment said a medical examiner later confirmed that he had been dead for between eight to 10 hours, passing away early in the night.

“There was no emergency, no opportunity for intervention where I could have changed the outcome,” Brandes wrote.

After calling emergency services, she had one more important call to make.

‘The Evening Before Was Normal’

Storment recalled the night before the tragic incident.

He wrote that Wiley was “healthy and engaged” with all the friends he had over for dinner.

Everyone played on the giant trampoline together at the house that was purchased a few weeks prior.

Storment then saw that Wiley started to get “bossy” with the other kids because they weren’t following the rules of the game. Wiley’s “bossy” behavior came from his “opinionated” personality, according to Storment.

He pulled Wiley aside and had a “stern” interaction with him that led to the 8-year-old crying.

“It’s one of the last interactions we had and I’ve beaten myself up for it a dozen times,” he wrote.

The father added that he was “too stern” in hindsight and recalled that moment.

“I can still see the tears rolling down his face and the protestations of, ‘But you’re not listening to me. No one listens to me.'”

Storment and Wiley made up after ordering take-out, apologizing at bedtime, and had a good snuggle before Storment left for his bedroom.

The following day, Storment was in a meeting with 12 people in a conference room when Brandes discovered that Wiley had died.

The couple had previously agreed that if ever something was important enough that one of them had to make a call, the other would answer no matter what.

When Storment received a call from Brandes, he left the room to answer it.

He wrote that a co-worker drove Storment to his house because he didn’t have the remote to his workplace parking garage.

But when he arrived, six armed officers got in his way and wouldn’t let him inside, according to Storment.

“When a child dies suddenly, it becomes a potential crime scene,” he wrote.

After two-and-a-half hours, Storment told the officers that he couldn’t wait any longer. They allowed him to see his son through the sliding glass window.

“He lay in his bed, covers neatly on, looking peacefully asleep,” he wrote. “I put my hand on the glass and lost it.”

After the medical examiner was done, Storment and Brandes went in.

“An eerie calm came over me,” Storment wrote. “I laid down next to him in the bed that he loved, held his hand and kept repeating, ‘What happened, buddy? What happened?'”

“We stayed next to him for maybe 30 minutes and stroked his hair before they returned with a gurney to take him away. I walked him out, holding his hand and his forehead through the body bag as he was wheeled down our driveway. Then all the cars drove away. The last one to leave was the black minivan with Wiley in it.”

‘Time Really Can Be So Cruelly Short’

Brandes ended her LinkedIn post with a lesson learned from their tragedy: Make time for your kids.

“If we’ve learned anything at all, it’s that life is fragile and time really can be so cruelly short,” Brandes wrote.

“We wish a lot of things were different,” she continued. “But mostly we wish we’d had more time. If you are a parent and have any capacity to spend more time with your kids, do. When it ends, there’s just photos and left over things and time is no longer available to you.

“It is priceless and should not be squandered. Take your vacation days and sabbaticals and go be with them. You will not regret the emails you forgot to send.

“From now on, if you email or text me and my reply takes longer than expected, know that I am with the people I love sharing my time, creating my new identity and I encourage you to do the same.”