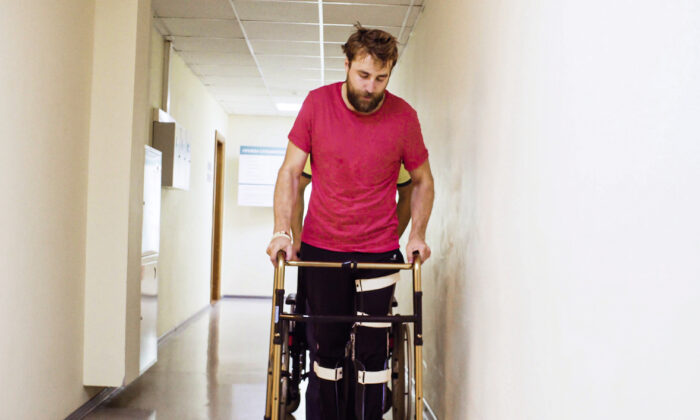 A man paralyzed for over two years has now gained the ability to walk again owing to a breakthrough Swiss treatment that reactivated his muscles by inserting a spinal cord implant and attaching electrodes to individual nerve fibers.

Michael Roccati was involved in a motorcycle accident in 2017, which left his lower half completely paralyzed. Roccati subsequently enrolled in a research program with the Swiss Federal Institute of Technology in Lausanne (EPFL) that developed implants to send electrical impulses to his muscles mimicking the brain’s action.

“It was a very emotional experience,” Roccati told journalists about the feeling of taking his first step using the system.

The epidural electrical stimulation (EES) at EPFL focuses on the dorsal roots of the lumbosacral segments in the spine and restores the ability to walk in people who have suffered spinal cord injury (SCI).

Roccati was one of the three patients who was part of the initial EES study, published by Nature Medicine on Feb. 7. All of the participants were paralyzed in their lower bodies after accidents.

So far, nine people have received the implant and one of them was able to become a father after the procedure, according to the BBC.

EES works by implanting an electrode on top of the nerves of the spinal cord. The system was developed by neurosurgeon Jocelyne Bloch from Lausanne University Hospital and neuroscientist Gregoire Courtine of the Swiss Federal Institute of Technology in Lausanne.

Spinal cord nerves, which control movements of the body, are stimulated by the electrical pulses delivered by the electrode. The pulses are triggered by software that issues instructions for specific body movements like walking, cycling, and so on.

The researchers tested EES on three individuals with complete sensorimotor paralysis. “Within a single day, activity-specific stimulation programs enabled these three individuals to stand, walk, cycle, swim, and control trunk movements. Neurorehabilitation mediated sufficient improvement to restore these activities in community settings, opening a realistic path to support everyday mobility with EES in people with SCI,” an abstract of the study states.

The initial steps taken by the three individuals were difficult. They required significant upper body strength and support bars to move, but they could at least begin the rehabilitation process.

Four months later, Rocatti was able to walk using just a frame for maintaining balance. He can now stand for up to two hours and walk for almost a kilometer (just over half a mile) without having to stop.

Though EES has shown incredible promise, researchers are not yet ready to make it available for treatment as they believe significant work still needs to be done. Trials involving 50 to 100 people in the United States and Europe are being planned.

The researchers also aim to miniaturize the computer which activates the pulse so that the device can be embedded into patients’ bodies. The device can then be controlled via a smartphone.

“They have done something that has not been done before … I have not heard of any study where they have put in an implant [into a patient with a complete spinal cord cut] and demonstrated muscle movements and improving balance, enough to stand and walk,” Dr. Ram Hariharan, a consultant at the Northern General Hospital in Sheffield, told the BBC. Hariharan is an independent member of the research team.