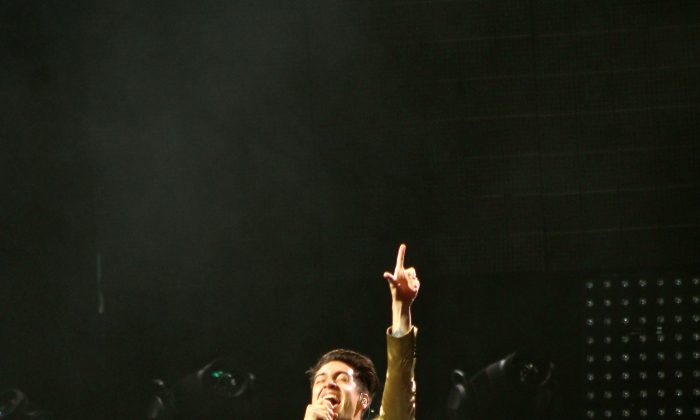 Panic! At The Disco Shines At Madison Square Garden

Panic! At The Disco provided a dazzling performance to a sold out crowd at Madison Square Garden Tuesday night. Rather than playing at the famous arena, they performed at The Theater in the Garden, a smaller, intimate but still exciting place as they promote their This Is Gospel Tour.

It certainly felt like a gospel at times as they opened up with “Vegas Lights,” a track from their latest album Too Weird to Live, Too Rare to Die!. Panic! kept feeding off the energy from their fans, as their set became more elaborate. Vocalist Brendon Urie proved to be quite versatile as he dabbled with the guitar, drums and the piano and performed backflips much to the delight of fans.

Perhaps the most memorable thing about their set was the band’s rendition of Queen’s “Bohemian Rhapsody.” The cover was covered in a way where for a moment you sensed that Freddie Mercury was alive and well into Urie’s soul.

Panic! performed their prominent tracks including: “Nine in the Afternoon,” “But It’s Better If You Do,” “New Perspective,” “Lying is the Most Fun a Girl Can Have Without Taking Her Clothes Off,” “The Ballad of Mona Lisa” and their breakthrough single “I Write Sins Not Tragedies.”

It’s been ten years since Panic! At The Disco popped into the pop-punk scene with Fall Out Boy, Gym Class Heroes and Paramore and if last night is any proof, they have completely come out of their fellow label mate’s shadow and evolved from just another scene band to seasoned indie pop veterans.