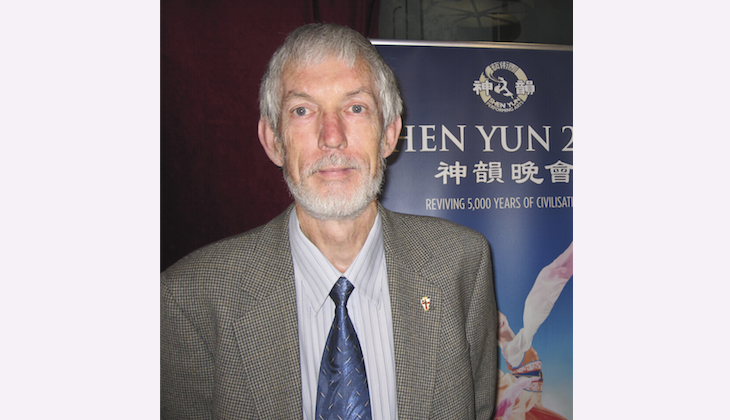 'Truth and love will always triumph over evil and revenge'
BY Epoch Times Staff TIMEMay 5, 2014 PRINT

PERTH, Australia—“I was delighted. It was magnificent,” said doctor Doug Bridge when he saw Shen Yun Performing Arts at The Regal Theatre, on Sunday May 4, for the final Australian performance. The full house applauded often and encouraged solo soprano Min Jiang to sing an encore.

“It was artistically superb. It was perfectionism,” he said.

Shen Yun is based in up-state New York and has classical Chinese dance as its heart. “Through the universal language of music and dance, Shen Yun weaves a wondrous tapestry of heavenly realms, ancient legends, and modern heroic tales, taking you on a journey through 5,000 years of Chinese culture. Its stunning beauty and tremendous energy leave audiences uplifted and inspired,” the Shen Yun website explains.

“It was a gold medal performance,” Dr. Bridge said. “The music was superb.”

“I loved the introduction of the educational comments from the two presenters. I loved it being in Chinese and English.”

Dr. Bridge is aware of the effects of communism of China and was pleased to see Shen Yun reviving the 5000 years of traditional Chinese. He felt Shen Yun was good for the soul, and there were messages of hope for the Chinese people.

“Love, compassion and forbearance are universal, so I am quite supportive,” he said.

“The Chinese culture, which is now very materialistic and capitalist, … I feel encouraged that there’s a movement from Chinese culture saying we want to re-acknowledge our spirituality. It’s been suppressed by Maoist teaching for 60 years.”

The Shen Yun website states “Over its past 60 years of rule, the communist regime has treated traditional Chinese values?centered on the idea of harmony between heaven and earth?as a threat to its existence. And in its systematic campaigns like the Cultural Revolution, it has uprooted traditional beliefs and destroyed ancient treasures?bringing traditional 5,000 years of civilization to the brink of extinction.”

Shen Yun’s mission is to “revive the true, divinely inspired culture of China and share it with the world.”

Dr. Bridge was pleased to see Shen Yun reviving the divinely inspired culture. I see a resurgence … of spiritual growth which is replacing the empty materialist, competitive culture,” he said.

“[I am] encouraged in my own life, and encouraged that Chinese culture may be progressing even though there’s some opposition. … With forgiveness and patience, truth and love will always triumph over evil and revenge.”

Dr. Bridge said he reflected on the last performance “Buddha’s Compassion Shines Forth” where the Buddha saves the world through his infinite grace.

“I reflected deeply about that. … there’s a deep truth there, there is a spiritual battle of evil and good,” he said.

Dr. Bridge wanted to encourage everyone to see Shen Yun. He said, “It’s very high quality, it’s probably like nothing you’ve ever seen before. Musically, artistically, spiritually, it’s well worth it.”

He was very pleased to see Shen Yun had a sell-out performance and he wanted to thank the performers “for your brilliant artistic performance. I’m impressed by your devotion to your beliefs in the face of persecution and ridicule. God bless you.”

Dr. Bridge is a medical doctor specialising in palliative care, he is a Clinical Professor associated with the School of medicine and pharmacology at the University of Western Australia. In the past, he has held many positions such as Head of the Department of Palliative Care at Royal Perth Hospital, and chair of the Australasian Chapter of Palliative Medicine at the Royal Australasian College of Physicians.