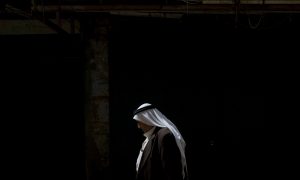 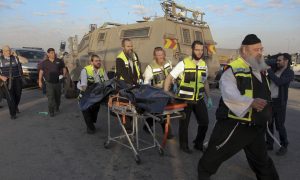 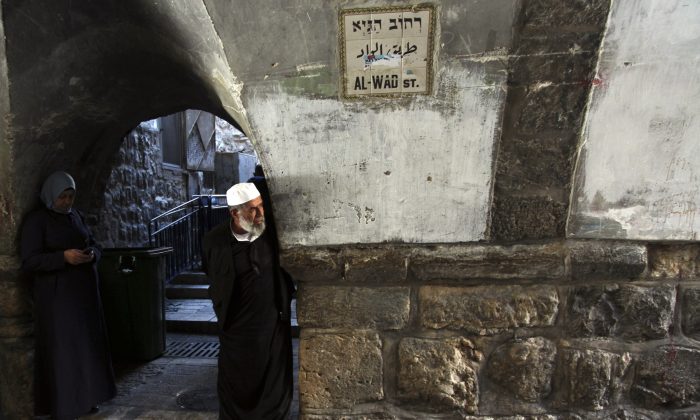 Palestinians look at the scene after a stabbing attack in Jerusalem's Old City Sunday, Mov. 29, 2015. A Palestinian stabbed an Israeli police officer in Jerusalem on Sunday before being shot dead by security forces, police said. (AP Photo/Mahmoud Illean)
Middle East

JERUSALEM—A Palestinian stabbed an Israeli police officer in Jerusalem on Sunday before being shot dead by security forces, and another Palestinian stabbed a woman in the back as she was waiting for a bus, police said, as a two-month wave of violence showed no sign of relenting.

Police spokeswoman Luba Samri said a 38-year-old Palestinian walked past two officers near a gate into the Old City and then yelled “God is greatest” before stabbing one of them in the neck, moderately wounding him. Other officers opened fire at the attacker and shot him dead. Another knife was later found on his body.

Hours later, a Palestinian stabbed a woman in the back as she was waiting at a Jerusalem bus stop before escaping, Samri said. The woman, a foreign national, was evacuated to hospital and police fanned out across the city in search of the stabber—a teenager who was later found in a nearby construction site.

The violence erupted in mid-September over tensions at a Jerusalem holy site. Since then, 19 Israelis have been killed in Palestinian attacks, mostly stabbings and shootings. At least 97 Palestinians have been killed, including 62 said by Israel to be attackers. The others died in clashes with Israeli forces.

Israel says the violence stems from Palestinian incitement and incendiary videos on social media. Most of the attackers have been young Palestinians in their teens and early 20s. The Palestinians say the violence is rooted in frustration over nearly a half-century of Israeli occupation and lack of hope for obtaining independence.

At his weekly Cabinet meeting, Prime Minister Benjamin Netanyahu said the violence was driven by “opposition to the existence of the state of Israel as the national state of the Jewish people, in any borders whatsoever.”

“Added to this opposition is an element of radical Islam that strikes worldwide—in Paris, in London, in Madrid, in Mali—where there are of course no settlements,” he added.

Much of the recent violence has emanated from Hebron, the largest West Bank city, where hundreds of Israeli settlers live in heavily-guarded enclaves surrounded by tens of thousands of Palestinians.

The Israeli military raided a Palestinian radio station in Hebron on Sunday and confiscated equipment it said was being used to broadcast calls to attack Israelis. The military said it shut down the “Dream” radio station overnight, marking the third time Israel has closed a Hebron station it accuses of inciting violence.

The military said the station “repeatedly broadcast content that promotes and encourages terror and acts of violence” against Israelis.

Israel has already announced it will fortify an existing fence west of Hebron as a security measure.