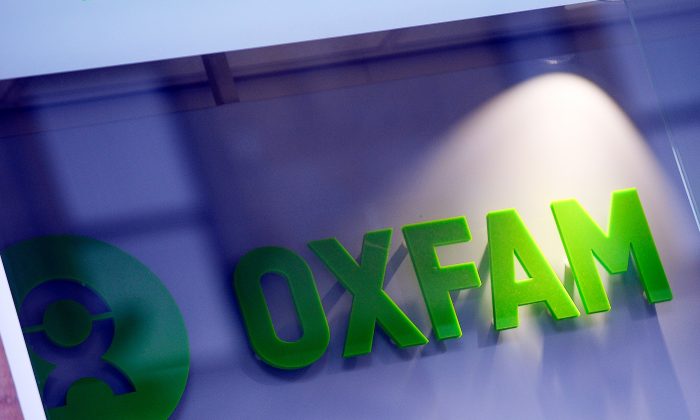 The logo on the front of an Oxfam bookshop is photographed in Glasgow on Feb. 10, 2018. The British Government announced late on Feb.9 it was reviewing all work with Oxfam amid revelations the charity's staff hired prostitutes in Haiti during a 2011 relief effort on the earthquake-hit island. (ANDY BUCHANAN/AFP/Getty Images)
International

LONDON—Oxfam’s chief executive said criticism of the charity following a sex abuse scandal had been disproportionate, according to comments published on Saturday.

In an interview with British daily the Guardian, Mark Goldring again apologized over allegations of sexual abuse by Oxfam staff in Haiti, which broke last week and have shaken the whole aid sector.

“(But) the intensity and ferocity of the attacks makes you wonder, what did we do? We murdered babies in their cots?,” he was quoted as saying.

“Certainly the scale and intensity of the attacks feels out of proportion to the level of culpability.”

UK-based Oxfam, one of the world’s biggest disaster relief charities, has neither confirmed nor denied the Haiti allegations but has said an internal investigation in 2011 confirmed unspecified sexual misconduct occurred.

It has also agreed not to bid for any new state funding until Britain’s government is satisfied the charity meets appropriate ethical standards, development minister Penny Mordaunt said on Friday.

“Anything we say is being manipulated… We’ve been savaged,” Goldring also told the Guardian, which ran a full-page ad from the charity saying sorry for the “appalling behavior that happened in our name”.

Haiti’s president told Reuters on Friday that sexual misconduct by Oxfam staff was only the tip of an “iceberg” and called for investigations into Medecins Sans Frontieres (Doctors Without Borders) and other aid organizations that came to the country after a devastating earthquake in 2010.

Doctors Without Borders said on Wednesday it had dealt with 24 cases of sexual harassment or abuse among its 40,000 staff last year, and dismissed 19 people as a result.

Britain has said it will deny cash to aid organizations that fail to come clean on abuse.

But Prime Minister Theresa May said it would continue to meet its legal obligation to spend 0.7 percent of economic output on international development.

She made the comment in a speech in Munich on Saturday, in which did not directly address the allegations against Oxfam and other charities.