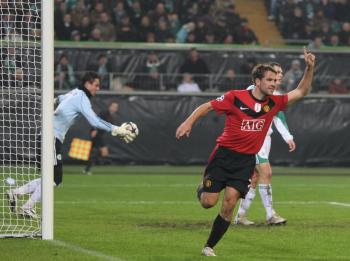 Rahul Vaidyanath
Journalist
Rahul Vaidyanath is a journalist with The Epoch Times in Ottawa. His areas of expertise include the economy, financial markets, China, and national defence and security. He has worked for the Bank of Canada, Canada Mortgage and Housing Corp., and investment banks in Toronto, New York, and Los Angeles.
View profile
Follow
biggersmaller
Print
Whether or not they came as a young and inexperienced team, Manchester United stormed into Germany on Tuesday and dumped Wolfsburg 3–1 thanks to a hat trick from Michael Owen.

Yes, the former boy wonder played a starring role given the injuries to Wayne Rooney and Dimitar Berbatov.

With the win, United claims top spot in Group B.

“I’ll probably grab all the headlines but it was a great team performance,” said Owen in an interview with Sky Sports.

Wolfsburg took the game to their visitors from England but squandered their best chances.

Owen gave United the lead with a header just before halftime. But highly regarded striker Edin Dzeko equalized for Wolfsburg in the 56th minute with a header.

Late in the match, Owen scored two goals in seven minutes to seal the deal for Manchester United.

Real and Milan Move On

Ronaldo’s first goal came from a brilliantly struck free kick that dipped into the top left corner of the net.

His second goal of the game came courtesy of some quick thinking and good balance. Lassana Diarra sent a long pass, which Ronaldo chased down. Just as the Portuguese striker reached the ball he entered into a collision with Marseille goalkeeper Steve Mandanda. Ronaldo managed to bounce back on his feet, turn and shoot into the wide open net.

Meanwhile in Zurich, Ronaldinho scored from the penalty spot to give Milan a 1–1 draw with FC Zurich. With the result, Milan finishes second in Group C with 10 points.

Struggling German team Bayern Munich pulled a rabbit out of a hat with a stunning 4–1 victory in Turin over Italian superpower Juventus.

After that, Bayern made the most of their chances as Ivica Olic put in a rebound off a header by Daniel van Buyten. Mario Gomez and Anatoliy Timoschuk added a couple of late goals.

Bayern Munich finishes second in Group A behind Bordeaux, who beat Maccabi Haifa 1–0. Bordeaux finish the round robin with a very impressive record of five wins, one draw and no losses.