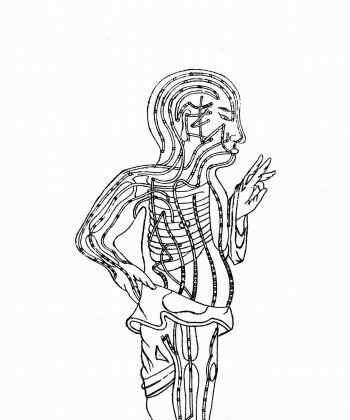 A drawing of organ meridian energy flows. As with organs, each organ flow becomes more active at a specific time of the day. (Photos.com)
Chinese Medicine

Organs Have Their Own Circadian Clocks

By Yo HongYi
biggersmaller
Print
Everybody knows that the body has circadian rhythms. Interestingly, scientists have discovered that the organs in our body are just like numerous independent beings with their own internal clocks.

Scientists previously believed that the circadian rhythm of the human body was strictly controlled by the master clock located in the brain, but they have now discovered that this is not true.

In an article published in the May 2002 issue of Nature, researchers from Harvard Medical School and other research institutes reported an interesting discovery. By studying tissues of the hearts and livers of mice, they discovered that the physiological activities of the body were controlled by the local circadian clocks of the organs.

The chiming of each organ clock triggers different waves of gene activities, which can be adjusted over time to accommodate new schedules and life paces. The different organ clocks appear to be strikingly idiosyncratic in appearance.

For example, the clock located in the liver and the clock in the heart use very different sets of genes to perform the functions that are basically the same.

In the article, Charles Weitz, Harvard Medical School professor of neurobiology, explained: “Different tissues have to be cycling for different reasons. This allows organs to reset their activities according to their own priorities, which makes a lot of sense.”

The discovery shows that the organs have their own relatively independent metabolic activities. Ancient Chinese science actually regards these organs as independent lives. For example, the Tao School believes that our human body is a universe with various kinds of lives in it.

Traditional Chinese medicine also treats each organ as an independent system, with each different organ possessing different attributes. They have their own independent life activities, while interacting with each other.

For example, in traditional Chinese medicine, there is a theory of Five Elements – kidney belongs to water, liver belongs to wood, lung belongs to metal, pancreas belongs to soil and so on. Different organs interact with each other via the principle of mutual-generation and mutual-inhibition among the Five Elements.

Moreover, ancient Chinese science believes that all things in the world have their own spirits. Therefore, one would pay attention to the time and season for picking tealeaves. In addition, there are strict requirements on the virtue of the persons who pick the herbs and teas.

In a prescription of traditional Chinese medicine, different components play different roles, including the “emperor,” the “officials,” the “assistants,” and the “ambassador.” The belief that everything has its own spirit is consistent with scientific experiments.