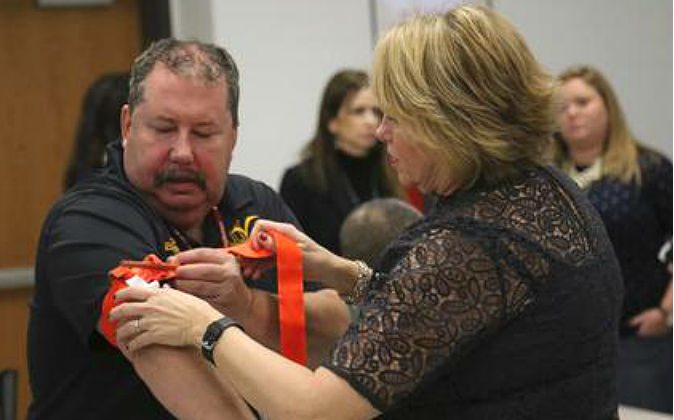 Ordinary People Trained to Save Lives in Shootings, Attacks

It’s become a hallmark of terror attacks and school shootings: the fateful minutes or hours when the wounded are hunkered down, waiting for the violence to play out and for help to arrive.

In Monday’s car-and-knife attack at Ohio State University, one of the 11 wounded victims hid in a campus building for nearly 90 minutes before police gave the all-clear and she could be treated. When a gunman opened fire at an Orlando, Florida, nightclub, in June, a woman sent a frantic text message to her mother saying she had been shot and couldn’t stop the bleeding. She later died.

Such incidents are the impetus behind a new federal initiative to train everyone at schools and other public places – custodians, security guards and administrators – on how to treat gunshots, gashes and other injuries until actual EMTs can get to the scene.

Nobody should die from preventable hemorrhage.
— Dr. James Vosswinkel

“We don’t want you to just hide and bleed to death like we saw in Orlando and other places,” said Lawrence Zacarese, Stony Brook University’s assistant chief of police. “We want you hiding and maintaining and doing some administration of first aid until we can get there.”

At a training session Tuesday, paramedics and doctors brought in fake body parts – blood spurting from the wounds – to show staffers of a Long Island school district how to tie tourniquets and pack open wounds with whatever they have.

“Seconds matter. It really can be minutes when you can lose your life,” said Dr. James Vosswinkel, the chief of trauma and emergency surgery at Stony Brook University Hospital, who led the training.

“Take yesterday at Ohio State, someone is hiding out and if they are hemorrhaging, what do they have available? Do they have shoe strings on? Do they have a tie on? Can they make a tourniquet?” Vosswinkel said.

Doctors emphasized that in the critical seconds after an attack it’s important for teachers and other school staff to stay calm and begin assessing injuries. Teachers learned to apply tourniquets in case a student is shot in the arms or legs – using T-shirts or belts, if necessary – and to stick anything they can to pack wounds in the torso.

“I don’t care if you stick Kleenex in there, pack it up,” Vosswinkel said. “We want the average person, even if they are injured themselves, to be able to perform these potentially life-saving medical skills.”

They drew the line, however, on untrained people trying to do more invasive emergency procedures, such as trying to remove a bullet, which could end up making the bleeding worse or causing an infection.

Among the questions raised during the training: What do you do if a kindergartener is shot? How do you keep a class of kids quiet while holding down a 5-year-old child and try to stop them from bleeding to death?

“I always think of what happened in Columbine and the students saying ‘We have a teacher up here. He’s bleeding to death. Please get up here!'” said Cheryl Pedisich, the superintendent of the Three Village Central School District, whose staff was being trained Tuesday. “Had they had these strategies to be able to use, I think that teacher probably could have lived.”

Stony Brook doctors have reached out to local schools to offer the training, but are looking to expand the program as part of a federal Department of Homeland Security initiative to other schools, colleges and police departments across the country.

“Nobody should die from preventable hemorrhage,” Vosswinkel said.