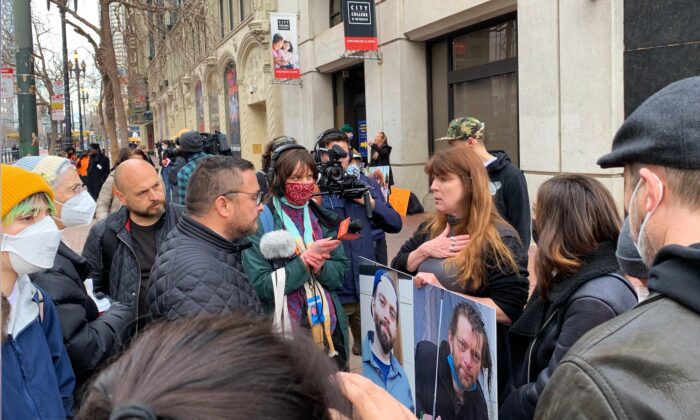 A California mom whose fentanyl-addicted son is living on the streets of San Francisco is calling on Gov. Gavin Newsom to veto legislation that would allow the creation of supervised drug consumption sites in Los Angeles and San Francisco counties, as well as the city of Oakland.

“It’s insanity. It’s normalizing drug use,” Jacqui Berlinn, co-founder of the California-based organization Mothers Against Drug Deaths, told The Epoch Times. “Nearly everything has fentanyl in it, and to open drug dens that are going to allow people to use fentanyl is literally a death sentence to my son and to others. There’s no safe way to use fentanyl.”

All state Senate Republicans signed a letter on Aug. 1 asking Newsom for a “swift veto” of the legislation, Senate Bill (SB) 57, which would allow the operation of “drug dens” and provide addicts with sterile needles as well as other supplies “for pre-obtained drugs.”

The Senate voted 21 to 11 along party lines to pass SB 57 on Monday, with all Senate Republicans voting against it and eight Democrats abstaining. The bill is now headed to Newsom’s desk for him to either veto it or sign it into law.

Sen. Scott Wiener (D-San Francisco) introduced the bill as an overdose prevention program. He said these “supervised consumption services” are a “necessary intervention” to prevent overdose deaths, according to the bill’s analysis by the Senate Health Committee.

He claimed around 165 such plans in 10 countries “have been rigorously researched and shown to reduce health and safety problems associated with drug use, including public drug use, discarded syringes, HIV and hepatitis infections, and overdose deaths.”

Wiener referenced a facility called “Insite,” the first supervised drug injection site in North America. Established in Vancouver, Canada in 2003, the site has recorded more than 3.6 million visits to inject illicit drugs under supervision by nurses, according to the regional health services provider Vancouver Coastal Health. The facility also reported 48,798 clinical treatment visits and 6,440 overdose interventions without any deaths.

Other successful supervised injection facilities are operating in the Netherlands and Sweden, Wiener said.

“In these desperate times, this bill provides California with the opportunity to lead by example and to equip itself with another tool that is scientifically proven to help prevent and decrease overdose deaths,” he stated in the bill’s analysis.

However, Berlinn argued that supervised consumption services in Canada are “failing horribly.”

“They’re spending so much more money to keep people addicted than they are to get them help,” she said.

Legalized drug dens are “just opening the door for non-profits to raise a bunch of money” but do little to help addicts get the treatment they need and set them on a road to recovery, Berlinn said.

Opening these facilities in more communities could encourage more drug use by making it seem more socially acceptable, she warned.

Addicts, she said, will also likely “get more brazen” and try to take bigger doses for a bigger high, if they know someone with NARCAN—a potentially lifesaving medication designed to help reverse an opioid overdose—is watching over them and can revive them.

California and Canada “think that if people come in to use at the drug dens, then they have more of an opportunity to contact them and talk to them about services. But, those connections, as we saw with the San Francisco model aren’t happening, and especially don’t happen with fentanyl.”

Earlier this year, the Tenderloin Linkage Center, a homeless center in San Francisco, dropped the word “linkage” from its name after very few people were linked to drug recovery services and other programs, while critics said it was already operating similar to a safe drug consumption site.

State Senate Republican Leader Scott Wilk said in a statement after the vote on SB 57 that the state should instead focus on rehabilitation, counseling, and other alternatives, including treatment protocols.

“Instead of focusing on a strategy to help people get their lives back, get off drugs and into treatment, California Democrats focus on giving people free needles and a safe place to shoot up,” Wilk said. “This is one of the most dangerous pieces of legislation that I’ve seen sent to the governor. Leaving people on the streets in squalor, rather than getting them help, shows zero compassion.”

The Republicans called the bill “a distraction from the real need for long overdue efforts to provide state-funded and operated effective drug treatment programs.”

“It is not humane, or compassionate, to allow individuals to live, shoot up, or die on the streets without providing them the assistance and help they need to recover and live fulfilling lives,” the letter states.

While the bill provides immunity for local officials and health care professionals under state law, “it cannot and does not do so under federal law, exposing them to potential federal criminal charges,” according to the letter.

“[E]nabling illegal and destructive drug use will never work,” Brown said in his veto message.