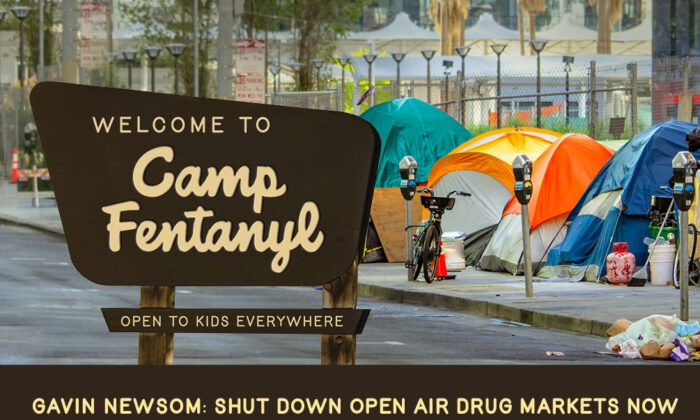 A billboard design by the group Mothers Against Drug Deaths. (Courtesy of Jacqui Berlinn)
Southern California

Mothers Against Drug Deaths rallied on May 12 at the state Capitol building in Sacramento, demanding that California Gov. Gavin Newsom do more to solve the state’s “out-of-control fentanyl epidemic.”

The group of mothers unveiled a new billboard advertising campaign at a press conference. The new billboard depicts a “tent city drug scene” as a campground with a national forest sign that reads: “Welcome to Camp Fentanyl, Open to Kids Everywhere,” and “Governor Newsom, shut down open-air drug markets now.”

The billboards are displayed on Interstate 80, near the Harbor Boulevard exit, and a third mobile billboard was onsite at the rally and will circle the Capitol building, said Jacqui Berlinn, co-founder of the group.

Berlinn’s 30-year-old son, Corey, is living on the streets of San Francisco, she said.

“He’s addicted to fentanyl. He started with heroin when he was 21. He had been smoking marijuana and a girlfriend encouraged him to try smoking some heroin. He said that he never would have tried had he not already been high from smoking marijuana, but he went ahead and tried a little heroin and he ended up getting addicted to it,” Berlinn told The Epoch Times.

About two years ago, when drug cartels and dealers began pushing heroin laced with fentanyl on the streets, Corey didn’t realize he had smoked fentanyl until it was too late, and he was already addicted, she said.

“He’s deteriorated more in the last two years on fentanyl than he ever did on eight years with heroin. This drug is incredibly debilitating, physically and mentally,” Berlinn said. “Withdrawals are so intense. Fentanyl addicts are incredibly afraid of withdrawals and getting dope sick. It not only is a physical agony, [but] it’s mental anguish and agony. Acute anxiety and depression set in.”

Though Corey has had stints of sobriety, he has been addicted to opiates for a decade.

“It’s so easy to stay addicted. They have to use like every two hours,” she said.

With so little time between fixes, it doesn’t give an addict a lot of time to reach out and get help, she said.

“They’re usually spending most of their time just trying not to be sick. Most of them aren’t even getting high anymore when they use. It’s all about just maintaining, feeling OK,” she said.

Berlinn was so worried about Corey using fentanyl, she even asked him to go back to heroin.

“I asked him about going back to heroin, which seems insane to me … [but] he said, for two reasons, he won’t or can’t,” she said.

One reason is that he doesn’t want to use needles again, which he would have to do because heroin is not as strong as fentanyl, and another is that going back to a drug that’s not as strong is really difficult, Berlinn said.

“You have to use a lot more,” she said. “It’s also more expensive. And honestly, he says you can’t really find that on the streets anymore.”

Fentanyl has taken over because it’s synthetic and much cheaper for drug cartels to move than bulkier “bricks of heroin,” she said.

“Because of what I’ve seen my son go through on the streets, I started to get more and more involved and tried to understand what’s happening,” she said.

Since Berlinn co-founded Mothers Against Drug Deaths last August, she’s met other parents and people affected by the drug epidemic who have joined the fight against it.

San Francisco has enabled drug addicts to keep using by giving them money and drug paraphernalia, she said.

Though every parent of a drug addict knows not to give them money, addicts can get a free phone and $600 cash per month just for being “homeless and living in San Francisco,” she said.

“It’s making it even harder for addicts to step away. It’s drawing them in deeper,” she said.

When addicts, like her son, get arrested occasionally for possession it sometimes gives them moments of clarity that allows their loved ones get them the help they need, she said.

“There’s no pressure on an addict to not use anymore; they’re encouraged,” Berlinn said. “They’re also given the paraphernalia. In San Francisco, they’ll give you needles, pipes, foil, straws, anything you could possibly want. My son actually showed me this kit that he was given. You go across the street, get your drugs, and then go across the street the other way and get your kit.”

The drug problem in San Francisco has gotten so “out of hand” that Berlinn is now calling on the governor to step in.

Though Breed declared a state of emergency over the drug epidemic, “there wasn’t much change at all,” and she ended it three months later, Berlinn said. “Then she went to Europe to promote San Francisco as a tourist destination. We don’t believe it’s safe for the citizens of San Francisco, let alone international tourists to come visit.”

With “all the illicit fentanyl that’s flooding the streets,” Newsom should consider declaring a statewide emergency and shut down open-air drug markets such as “the Tenderloin” in San Francisco, and Skid Row and Venice Beach in Los Angeles, she said.

“Dealers are allowed to sell out in the open, and the police just walk by,” Berlinn said. “Basically, you can walk up to a dealer as an addict and buy anything you want, and you can use it on the streets in front of everybody. So you can buy, sell, and use openly on the streets just as if you were going to a farmer’s market, but it’s a drug market. It’s also methamphetamine. It’s crack cocaine. They have it all.”

“We’re calling on Gavin Newsom to step in because it’s obvious that the leadership in San Francisco is either unwilling or unable to deal with it,” Berlinn said.

The drug epidemic is “glossed over as homeless issue when it’s truly a drug addiction, mental illness issue,” she said.

More than 15 Californians die every day from a drug overdose and even first-time fentanyl use “can mean death,” Berlinn stated in a media release.

One mom, Michelle Leopold of Marin County, whose son died from a pill laced with fentanyl, said in a media release she is shocked that open-air drug markets are allowed to flourish without any consequences.

“My son, Trevor, will always be 18 years old because of overdosing from illicit drugs,” Leopold said.

The moms, some of whose children have died from fentanyl overdoses, called on Newsom to “save California’s kids” and shut down all “open-air drug markets” in the state. They asked Newsom in a letter to step up efforts to solve the drug epidemic in California.

“California’s open drug markets, such as the Tenderloin in San Francisco, operate illegally in plain sight in front of public officials, residents and their children and tourists, in contravention of California law. Any time of the day, any day of the week, people are dealing and using illicit drugs such as … fentanyl, meth, and other lethal substances out in the open.”

Citing the recent deaths of Victoria Moran-Hidalgo, 16, and a 15-year-old Pacific Grove boy, the letter points out there are no barriers to prevent minors from entering these areas to buy or use drugs.

“For parents like us who have a front-row seat watching this tragedy unfold in slow motion, it’s frankly unbelievable,” the letter states.

“Because it is incredibly powerful in even the smallest doses, fentanyl is being mixed with other drugs and marketed as other drugs. Many drug users who die of fentanyl overdoses never even know that they have been given fentanyl. The epicenter of this fentanyl disaster is the Tenderloin neighborhood in San Francisco,” Anderson said.