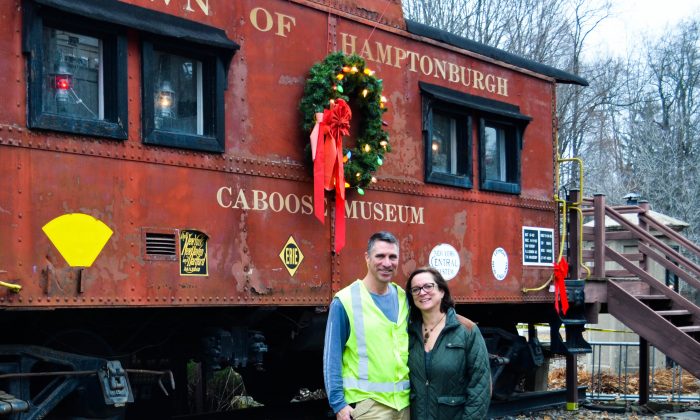 CAMPBELL HALL—The Middletown & New Jersey Railroad delivered Santa and picked up toys for less fortunate children at its scheduled stop at the little red caboose in Campbell Hall on time on Dec. 13.

Timothy Meade and his wife Luane organized the fourth annual Campbell Hall stop and were happy to help. He said the goal is to double the amount of toys from the previous year, which collected 14,000 toys. “It’s important for the community to keep people coming out and show children the joy of giving.”

The line’s fourth annual “Operation Toy Train” collected donated toys for the U.S. Marine Corps Reserve Toys for Tots Foundation. All toys collected will be distributed to families in need in the area. The train stopped at four other locations. Five railroads loaned engines, rolling stock, and use of their tracks for the event.

People in the community dropped off new, unwrapped toys at the red caboose in the first weeks of December. The railroad event gathered the toys for the Marine Corps Detachment at Stewart Air Base to distribute to local children. Santa Claus and the Marines will be at the base to receive them.

The train started off in Walden, then traveled to Montgomery, Campbell Hall, Sugar Loaf, and Warwick. The mission of the U.S. Marine Corps Reserve Toys for Tots Program is to collect new, unwrapped toys during October, November, and December each year and distribute those toys as Christmas gifts to needy children in the community where the campaign is conducted.

The national Toys for Tots program ensures that more than 97 percent of donations goes to providing toys, books, and other gifts to children. Less than three percent is spent on fundraising and overhead.

The activity takes place in the communities in which a Marine Corps Reserve Unit is located.  In communities without a Reserve Unit, the campaign can be conducted by a Marine Corps League Detachment or group of men and women, generally veteran Marines, authorized by Marine Toys for Tots Foundation to conduct a local Toys for Tots campaign, according to the national website.