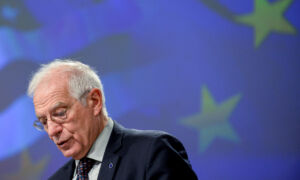 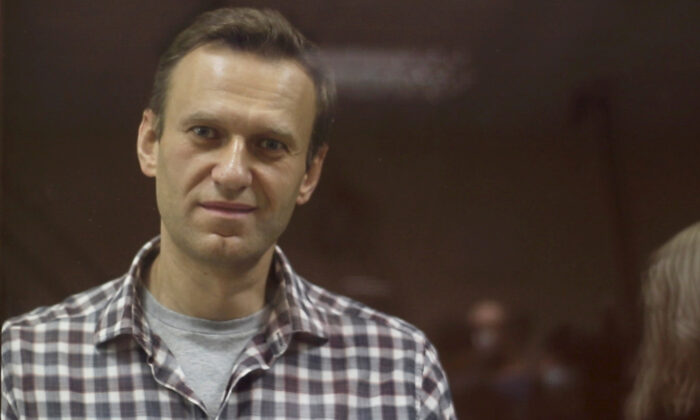 In this still image taken from video, Kremlin critic Alexei Navalny, who is accused of slandering a Russian World War II veteran, stands inside a defendant dock during a court hearing in Moscow on Feb. 20, 2021. (Press Service of Babushkinsky District Court of Moscow/Handout via Reuters)
Europe

Only ‘Language of Power,’ Sanctions Can Free Navalny, Ally Says

VILNIUS, Lithuania—Russia would only consider releasing Kremlin critic Alexei Navalny if its leadership was hit with painful personal sanctions, a close ally said ahead of a meeting with European policymakers in Brussels on Feb. 21.

European foreign ministers were expected to agree on Feb. 22 to impose sanctions on allies of Russian President Vladimir Putin in response to the jailing of Navalny.

Navalny was arrested last month on his return from Germany following treatment for poisoning with what many Western countries say was a nerve agent. He was jailed on Feb. 2 for violating parole on what he and the Western countries said were trumped-up charges. He lost an appeal on Feb. 20.

Leonid Volkov, Navalny’s chief of staff, told Reuters that he believes Putin would only consider releasing him if hit by sanctions.

“Putin is a dictator, but he is quite rational. If the upsides of having Navalny in prison become less than the downsides, he will change his decision,” Volkov said.

“If many of his closest allies become unhappy, this can be dangerous to Putin and this could lead him to decide to change his mind,” he added. “Or maybe not—but sanctions is the best thing that Europe can do now.”

In Brussels at the invitation of Lithuania, where he has been sheltering since 2019, Volkov said he will tell policymakers to use the “language of power” toward the Russian government, as he believes Putin sees bridge-building attempts by the West as a sign of weakness.

Asked to comment on Navalny’s political future after the court decision on Feb. 20, Kremlin spokesman Dmitry Peskov told reporters, “It is absolutely none of our business.”

Navalny’s allies have published a list of 35 people they believe should be sanctioned.

His supporters are now gearing up to organize a “huge peaceful protest” in Russia this spring, he said.

Navalny’s organization will then attempt to prevent Putin’s party from achieving a comfortable win at elections in September by campaigning for its rivals, Volkov said.