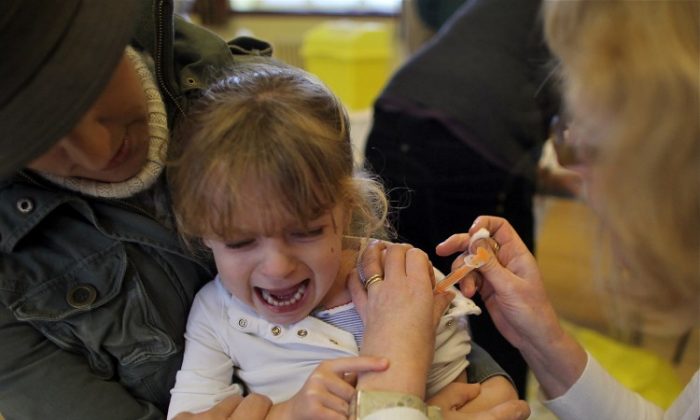 Getting vaccinated can be traumatic, and unfortunately, isn’t necessarily going to prevent the flu. (Christopher Furlong/Getty Images)
Mind & Body

One Way to Prevent Flu: Catch the Flu

The way we are encouraged to get vaccinated against flu, we might imagine this practice is a fail-safe way to avoid the condition. But we’d be wrong.

As I wrote recently in “‘Roll up’ for the Flu Vaccine?,” flu vaccination is a lot less effective than we have been led to believe. Plus, many individuals need to be vaccinated for one person to benefit. In other words, the vast majority of people who are vaccinated against flu will not benefit.

Last week, I wrote about an example of how flu vaccination can be reported in a way that puts it in a very positive light and fails to draw our attention to the fact that this practice is generally quite ineffective. This week I came across another article that made me think again about the wisdom of flu vaccination.

It concerned the supposed flu pandemic of 2009. The virus responsible was of the H1N1 type and was colloquially referred to as swine flu. Back in 1918, a similar flu strain caused an estimated 675,000 deaths in the United States. In 2009, the epidemic killed around 14,000 people—less than in some regular flu seasons. Why was the 2009 virus so benign?

There is evidence published online on Nov. 10 in the journal Clinical Infectious Diseases that catching a previous flu infection might have helped contain the H1N1 virus.

Researchers in America assessed about 500 people during 2009 and 2010. The individuals were tested for the presence of antibodies to H1N1 viruses in their blood. These were individuals who had not been vaccinated, meaning the antibodies must have come from natural contact and from infection with the flu virus.

In other words, previous natural exposure to an H1N1 virus appeared to afford significant protection against infection with the particularly virulent H1N1 virus of 2009. And the authors of the study speculate that previous exposure may well have contributed to the relative mildness of that pandemic.

This of course raises the possibility that one way to protect ourselves from flu is to catch flu, which is part of the natural order of things.

Dr. John Briffa is a London-based physician and author with an interest in nutrition and natural medicine. His website is DrBriffa.com.