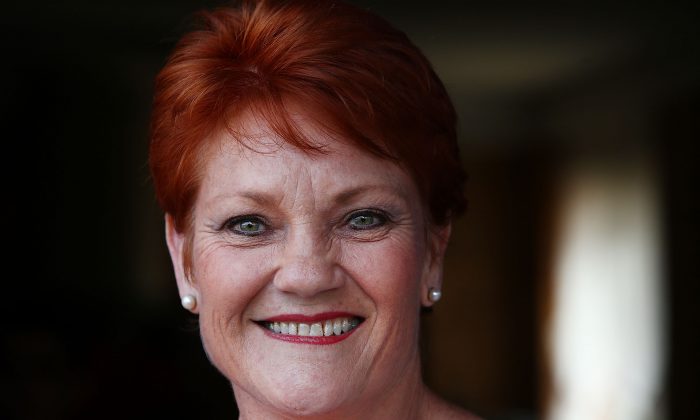 SYDNEY—Australia’s independent One Nation party said on Tuesday it will no longer support the government’s proposed corporate tax cut, all but ending Prime Minister Malcolm Turnbull’s hope for a policy victory ahead of a series of by-elections.

Turnbull’s Liberal-National coalition government had proposed to reduce the corporate income tax rate by 5 percent to 25 percent for all companies by 2026-27.

But Hanson said that it will take eights years for the government’s corporate tax cuts to come into effect. “If you want to help them, then why didn’t they address those tax cuts now?” Hanson challenged in a press conference in Canberra on Tuesday.

One Nation leader Pauline Hanson told The Australian earlier in the day: “The people in general don’t want it. It has not been well­ received.”

The legislation has been stalled in the Senate where the government is in the minority and was struggling to win the support of enough independent lawmakers.

“I, with my two colleagues, hold the balance of power in the Senate. The people of this country want leadership, they want honest, and they want trust. And I have to do that job. I regret pulling out of this, but considering the budget papers that were handed down, I cannot continue to pass down these corporate tax cuts,” Hanson said.

Hanson explained that her change in position on the Coalition’s budget was due to concerns that the government was not paying down its massive debt fast enough. “We’re not addressing the black hole in the budget, and I’ve got concerns that we’re not paying down debt,” Hanson told the press.

“We cannot keep giving away borrowed money to other countries when we cannot look after our own in this country,” Hanson said.

Politicians are hiding $78b from the national debt by pretending they're off-budget "investments": incl $47b NBN, $6bm Snowy purchase, $10b inland railway, $5b Badgery's Creek Airport & $5b NT Infrastructure. This costs you $2b interest pa plus the inevitable write-downs pic.twitter.com/UrdAxXw9GD

Hanson said that she had the “utmost respect” for Finance Minister Mathias Cormann and although she had yet to speak to him about her party’s withdrawal, she knew he would be “devastated over this.”

While she did not blame Cormann for the problems she sees in the budget, she said that colleagues and the government were the ones who had failed to address continued budget spending, skyrocketing electricity prices and high immigration numbers.

“I’ve got people in Australia that are homeless. I’ve got businesses and industries shutting down.

“Unless we actually look at a revenue stream for our country, we will not have the money to provide for future generations,” Hanson said.

“Multinationals must pay the taxes in this country. They cannot rip the guts out of this country with our gas on the north-west shelf without paying the right amount of tax.”

She said she hopes that the government of the day can “[g]et past the short-term vision of handing out lolly-pops and buying votes up to the next election. Decisions have to take us into the long-term,” Hanson said. “It’s about future generations.”

The opposition Labor Party, The Greens, and several independent lawmakers have said they will not back the bill.

Without One Nation and its three votes in the Senate, Turnbull’s center-right government is well short of securing enough support for the tax measure, analysts said.

The stalled tax legislation is the latest problem facing Turnbull ahead of five by-elections triggered when a group of opposition lawmakers were forced from office after being deemed dual nationals this month.

The dates of the by-elections have yet to be set but Turnbull’s Liberal Party is leading opinion polls in the race for the Queensland state seat of Longman.

A victory there would give his coalition a two-seat majority from the current one seat, but analysts said the troubled tax cut and other setbacks limited the impact of a by-election win.

“These failures build a perception of a prime minister who appears weak and unable to secure reform,” said Haydon Manning, a political science professor at Flinders University in South Australia state.