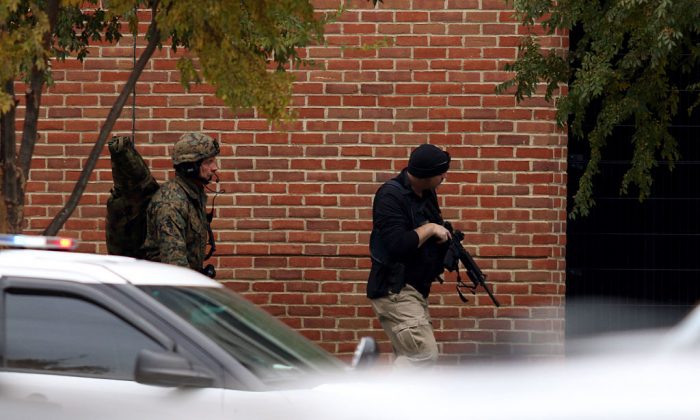 Law enforcement officials are seen outside of a parking garage on the campus of Ohio State University as they respond to an active attack in Columbus, Ohio, on Nov. 28, 2016. (VERNON/AFP/Getty Images)
US

Republican state Sen. Josh Brecheen has drafted four bills that would expand gun rights in the state. But some lawmakers say there are far more pressing issues when the Legislature meets on Feb. 6, including how to manage a massive budget shortfall estimated to exceed $300 million.

Brecheen said his proposals are necessary to counter what he believes is a constant threat of terrorism carried out by the ISIS terrorist group and other groups. Brecheen also said having armed officers in private schools could deter would-be mass shooters. He said he’s confident the GOP-controlled Legislature will pass the bills.

“These measures are really, really easy in terms of common sense; these are baby steps,” Brecheen said Wednesday. “We live in a different environment. Oklahomans realize law enforcement can’t protect us in every situation.”

In addition to dealing with the budget deficit, lawmakers must find a way to fund public education to keep teachers from leaving Oklahoma for better pay in adjoining states such as Texas and Missouri. Last month, voters rejected a 1 percent sales tax increase that would have funded teacher pay raises.

“I’m disappointed that it appears that based on the number of bills I’ve been told were being filed related to firearms that that is a higher priority than the people in my district,” said Matthews, adding that residents in his north Tulsa district live 11 years less than residents in other, more affluent parts of the city. “We seem to spend an exorbitant amount of time talking about the Second Amendment rights, which we already have in this country.”

Ohio Firefighter Shot, Wounded While on Scene of House Fire

Don Spencer, president of the Oklahoma Second Amendment Association, called gun ownership “a God-given right,” and said he disagrees that education should be treated as a higher priority than the constitutional right to bear arms.

“I’m still going to tell you gun rights are more important than education,” he said. “Education is not a right. The word education does not appear anywhere in the Constitution.”

Although the U.S. Constitution does not mention education, it is a part of the Oklahoma Constitution, which says that the Legislature must maintain free public schools for all children.