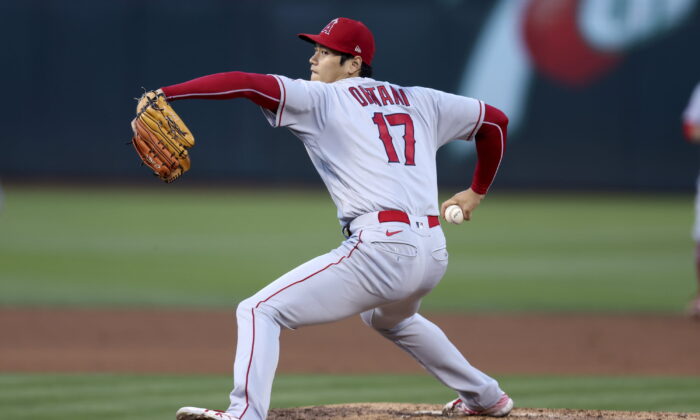 The two-way Japanese star joined Babe Ruth (1918) as the only players in major league history to have at least 10 home runs and 10 wins in the same season.

According to the Angels, two players from the Negro Leagues also did it: Bullet Rogan of the 1922 Kansas City Monarchs and Ed Rile of the 1927 Detroit Stars.

Ohtani singled and scored on Taylor Ward’s three-run homer in the fifth, then connected for a towering drive off Sam Selman leading off the seventh as a throng of red-clan fans sitting behind the Angels dugout roared.

On the mound, Ohtani (10–7) was mostly crisp. He had five strikeouts, allowed four hits and retired seven of his final eight batters.

The reigning AL MVP almost didn’t make it out of the third.

Two days after getting spiked on the top of his left foot following a collision with Mariners pitcher Marco Gonzalez near the on-deck circle, Ohtani was hit near the same area by an 87 mph line drive from Ramón Laureano.

After making the play for the final out of the inning, Ohtani bent at the waist in obvious discomfort and then limped slowly off the field.

He returned to the field a few moments later to test his leg, and stayed in the game.

Steven Duggar, claimed off waivers from Texas on Sunday, tripled and scored for Los Angeles. The Angels are 5–1 at the Coliseum this season.

Angels: Mike Trout has been hitting off a tee this week and could begin taking batting practice soon.

The slugger has not played since July 12 because of inflammation in his rib cage.

Athletics: RHP Brent Honeywell will pitch two innings of a simulated game in Arizona later this week and could begin a rehab assignment with Low-A Stockton afterward.

Honeywell has not pitched since sustaining a stress reaction in his right elbow in spring training.

The Angels had not announced a starter.