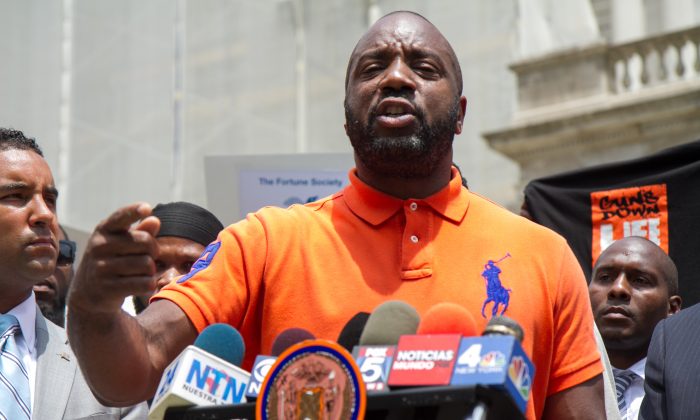 Actor and Philanthropist Malik Yoba, speaks about how he was shot when he was 15 years old walking home from a Manhattan city school, at City Hall, on June 30, 2014. (Benjamin Chasteen/Epoch Times)
New York

NEW YORK—June is Gun Violence Awareness Month (GVAM) concluded with the launching of the National Network to Combat Gun Violence (NNCVG) at a City Hall press conference on Monday, June 30.

At least 4 people were killed and 19 others were injured in a spate of shootings in New York’s five boroughs over the weekend.

The press conference was held by gun violence task force co-chair Council member Jumaane Williams and attended by legislators from other cities, such as Yonkers City Council members Christopher Johnson and Corazon Pineda. Anti-violence community groups, such as Guns Down Life Up and New Yorkers Against Gun Violence, were also present.

Williams emphasized tackling what he calls a national gun-violence “epidemic” at the grass-roots level. He founded the NNCVG to enable fluid and open communication, including the sharing of “best practices,” among local officials across the country.

Williams was dismissive of the suggested correlation between increases in violent crime, and reductions in the police measure of stop, question, and frisk. Williams has been passionately against the use of stop and frisk, particularly in New York’s minority communities. “You can’t ask black or brown people to accept something in their communities that no one else would,” Williams said.

Williams conceded that what he terms a “police state” measure would curb violent crime; but that he believes it would come at the cost of civil liberty. He spoke in favor of “common sense” gun laws, not laws that remove constitutional rights, such as the Second Amendment right to bear arms.

Actor and philanthropist Malik Yoba, known for his detective role in the 1990s police drama “New York Undercover,” spoke on the value of the arts in diverting young lives away from violence. Yoba recounted his own dramatic experience with gun-violence as a 15-year-old walking home from school in Midtown Manhattan.

Yoba intervened when he came across a young man being attacked by a group of adolescents, one brandishing a baseball bat and another a golf club. The adolescents responded by throwing Yoba on his back and shooting him in the chest. He was then left for dead.

Yoba, 46, said that he has since dedicated his life to “making the lives of other people better.” He called upon everyone present at the press conference to “pledge allegiance to creativity.” Helping young people to “access their inner creative selves” is a major force in curbing juvenile violence, he said.

Success of the NNCGV rests largely on the strength of collaboration between legislators and grass-roots anti-violence projects, such as Guns Down Life Up. Group facilitator with Guns Down Life Up’s umbrella project—the Harlem Hospital Injury Prevention Program, Osakwe Beale, said that “ground level, front line” interventions are effective, if implemented thoroughly and early enough in averting violent acts.

Beale works with other program members to discourage 18- to 24-year-olds who show up at hospitals with gunshot or stab wounds from retaliating against their attackers. Beale also shows the locally produced documentary “Triggering Wounds” to at-risk youth as a way to illustrate the impact that gun violence has on family members and the community.