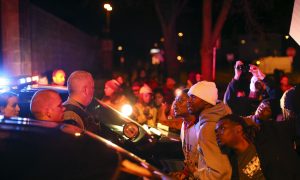 Protests Erupt After Black Man Shot by Police in Minneapolis
0 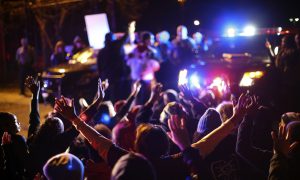 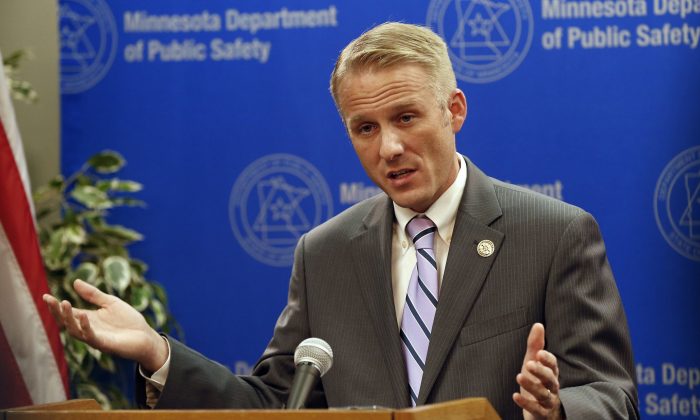 Minnesota Bureau of Criminal Apprehension (BCA) Superintendent Drew Evans briefs the media Tuesday, Nov. 17, 2015, in St. Paul, Minn., with an investigative update in the shooting of Jamar Clark by a Minneapolis police officer. Clark, who was on life support, died Monday evening. Black Lives Matter demonstrators have protested, including the blocking of a freeway and setting up an overnight encampment at the north Minneapolis police precinct. (AP Photo/Jim Mone)
US

MINNEAPOLIS—Authorities on Wednesday released the names of two Minneapolis police officers involved in the fatal shooting of an unarmed black man over the weekend, and police later made a show of force outside a precinct where protesters have been encamped for days.

The state’s Bureau of Criminal Apprehension, which is leading an outside investigation of Sunday’s shooting of 24-year-old Jamar Clark, identified the officers involved as Mark Ringgenberg and Dustin Schwarze. Both have been with the department for 13 months and have been police officers for seven years.

Police released the officers’ personnel records, but their races were redacted because the public isn’t entitled to such information under state law.

Hours after the release of the names, which demonstrators had been demanding for days, officers lined up outside of a north side precinct where protesters set up camp. They removed a shelter canopy and dumped water on a campfire, but left the roughly 18 tents untouched before forming a wall in front of the precinct’s entrance.

The several dozen protesters at the site jeered the officers, chanting “Shame on you!” The fire was quickly re-lit.

Chief Janee Harteau said the department has no plans to clear the area and stop the protests as long as they are peaceful.

“We will not tolerate property damage or acts of violence against anyone,” she said. She said the building’s entry must be kept clear for reasons of safety and access.

Police say Clark, a suspect in the assault, was interfering with medical workers trying to treat the victim early Sunday, and was shot when he scuffled with police. Some community members have alleged he was handcuffed when he was shot.

Police initially said Clark was not handcuffed when he was shot, but authorities later said handcuffs were at the scene and that they are trying to determine whether Clark was restrained.

Evans said investigators have video from several sources, including an ambulance, a mobile police camera stationed in the area, public housing cameras and citizens’ cellphones. But he said none of the videos captured the entire incident and none will be released while the investigation is ongoing to avoid possibly tainting it.

Asked whether any of the video shows Clark in handcuffs, Department of Public Safety spokesman Bruce Gordon reiterated that it captures a portion of the incident, but not everything, and said officials can’t discuss specifics because it could potentially taint witness statements.

Black Minneapolis Man Who Was Shot by Police Dies

Bob Kroll, The head of the Minneapolis police union, said Wednesday that the officers were interviewed Tuesday night.

“I hope they expedite the situation and wrap it up,” he said.

Kroll said he hoped people who say Clark was handcuffed “make a statement to the BCA on that matter.”

He added: “If it turns out to be blatantly false, they should be charged with a crime.”

Pressed on the timeline for results of the BCA investigation, Evans said two to four months is typical but that the Clark case “has been given top priority.”

The FBI also has agreed to conduct a civil rights investigation into the shooting.

The Hennepin County Medical Examiner’s Office ruled Tuesday that Clark died from a gunshot wound to the head and classified the death as a homicide.

Protesters had vowed to remain outside the 4th Precinct station near where the shooting occurred until authorities release any video.