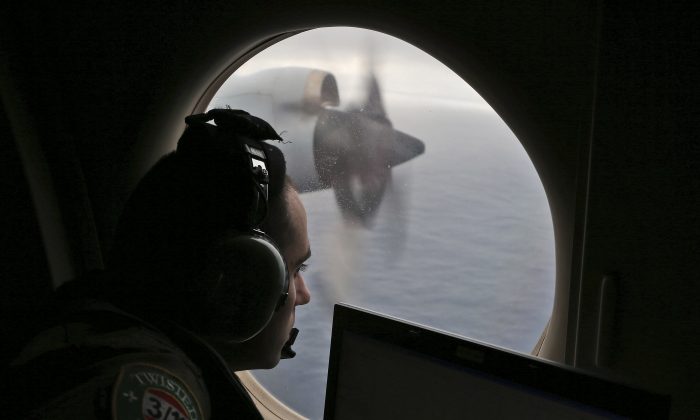 Adventurer Blaine Gibson handed Malaysian authorities in Kuala Lumpur on Tuesday three pieces of debris and personal belongings that he found on Madagascar beaches in June, which he suspects came from the Boeing 777 that vanished with 239 people on board during a flight from Kuala Lumpur to Beijing on March 8, 2014.

Western Australia University oceanographer Charitha Pattiaratchi said the same drift modeling that Gibson relied on led his team of oceanographers to suspect that the airliner could have gone down just north of the search area in the southern Indian Ocean.

“The best guess that we think is that it’s probably around the Broken Ridge region, which is slightly to the north of the area that they’re looking at,” Pattiaratchi said.

But he could not eliminate the possibility that the aircraft had indeed crashed within the 120,000 square kilometers (46,000 square miles) of seabed currently being searched southwest of Australia.

Despite the drift modeling and other predictions officials have made about the plane’s possible flight path, no one knows what happened to the aircraft or precisely where it crashed in what has become one of aviation’s biggest mysteries.

Officials from Malaysia, China and Australia will meet in Kuala Lumpur on Friday to discuss the future of the underwater search, with fewer than 10,000 square kilometers (3,900 square miles) remaining to be scanned by ships towing sonar equipment. The search of the seabed has not yielded a single clue.

The Australian Transport Safety Bureau, which has conducted the seabed search on Malaysia’s behalf for almost two years, did not immediately respond to a request for comment on Pattriaratchi’s views.

Drift modeling was not used to define the search area because no parts of Flight 370 had been found before a wing flap washed up on La Reunion island off the African coast a year ago. The search area was determined by analysis of satellite signals that the plane emitted in its final hours.

But the ATSB has previously said that wreckage found far away on the southwestern shores of the Indian Ocean was consistent with the plane crashing in the expansive search area.

Pattiaratchi’s modeling was based on how long the first piece of confirmed Flight 370 wreckage took to reach La Reunion, and his team’s calculations of the effects of currents, wind and waves on drifting debris put the crash site just north of the current search area.

Pattiaratchi said the results were not definitive. But families of victims are calling for the search to be shifted based on vague clues from debris already found if the seabed search turns up nothing.

The ATSB, like Pattiaratchi, had identified Madagascar as a potential place for debris to wash up.

Another six pieces of potential debris found there by Gibson are waiting with Madagascar authorities for Malaysia to collect.

Pattiaratchi said he had told Gibson that Flight 370 debris was likely to concentrate on Madagascar. Pattiaratchi’s earlier advice had led Gibson to Mozambique where he found debris in February that experts later determined came from Flight 370.

“He rang me from the Maldives and said: ‘Where should I go? Should I go to Rodrigues, Mauritius, Reunion, Madagascar, Mozambique, South Africa?'” Pattiaratchi said Thursday. “I said: ‘Your best bet is the northeast part of Madagascar,’ which is where he went.”

Five pieces of debris found in the southwestern Indian Ocean have been determined as almost certainly from Flight 370.

Gibson gives credit to Pattiaratchi and Australian government oceanographer David Griffin for his finds, although only one has been confirmed as part of Flight 370. Griffin’s advice led Gibson to a second Madagascar island where he found the potential debris that he brought to Malaysia.

Gibson said he had been told by Malaysian officials that costs were the reason that a Malaysian investigator had twice canceled plans to fly to Madagascar to retrieve debris he had found.

“They tell me it’s a budgetary situation,” he said. “If you’re spending hundreds of millions of dollars to search under water and finding nothing, and it’s only a plane ticket to pick up six pieces and some personal effects, you ought to just do it.”