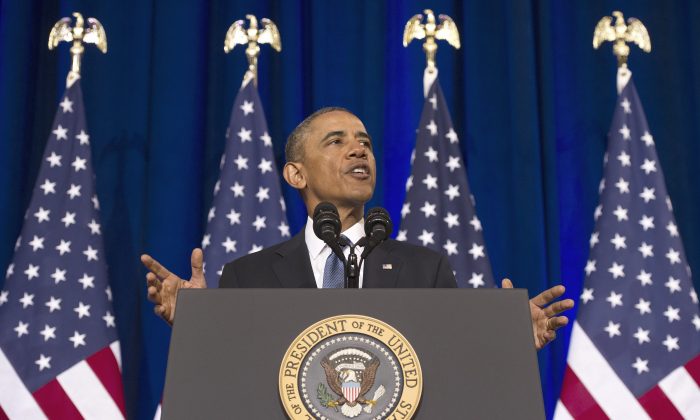 WASHINGTON—Under pressure from the Snowden leaks last summer, President Obama is keeping the NSA’s surveillance program but with a major overhaul on how the program operates. He said Friday in a televised address from the Justice Department that nothing he learned about it shows “that our intelligence community has violated the law or is cavalier about the civil liberties of their citizens.”

Based on the philosophy of preserving the NSA programs but making them more transparent and protective of privacy rights, the president outlined several changes. But Mr. Obama’s solutions brought an avalanche of criticisms due to their vagueness and difficulty in implementing.

Congress allows bulk collection of telephone records called metadata, under Section 215 of the USA Patriot Act. Congress passed it in response to the 9/11 attacks. It is the most controversial NSA program. The president will allow it to continue but NSA will not hold the data.

One option is to have the data held by service providers, for instance, Verizon. Then NSA would access the records when there was reasonable suspicion that the phone number is linked to terrorism. Another possibility for holding the metadata is to have a private entity retain the records.

Telephone company executives and their lawyers have bluntly told administration officials they do not want to become the NSA’s data minders. Cellular industry executives prefer the NSA keep control over the surveillance program and would only accept changes if they were legally required and spelled out in legislation.

Even with broader legal protections to shield phone companies from liability, the corporations are wary of being forced to standardize their own data collection to conform to the NSA’s needs. Phone companies already retain various forms of customer records, but the duration of their storage and the kinds of records they keep vary from less than two years, for companies including Verizon, US Cellular and Sprint, to seven to 10 years, for T-Mobile.

Compelling private providers or a third party to hold metadata “would create major obstacles to NSA obtaining quick access to the full range of data needed, for the program to be effective,” stated a paper written by CSP senior fellows Fred Fleitz and Clare Lopez.

Further, the CSP paper says that moving the metadata to private parties increases privacy and national security risks “since the information would be kept in less secure servers in numerous locations.”

Mr. Obama asks Congress to authorize independent advocates in sensitive cases to argue against the government before the secret court. His decision to ask Congress to authorize a panel of privacy advocates to weigh in at times during secret FISA court proceedings has triggered a roiling debate among constitutional lawyers, government counsels and privacy advocates. Legislators in the Senate and House have already drafted several rival bills creating similar independent advocates, but critics worry that none of the current proposals would pass constitutional scrutiny.

Government lawyers and several former Bush administration attorneys who were involved in the FISA process have questioned how the office of the public advocate would be set up and raise constitutional concerns about whom the advocates would represent.

The president will restrict the reach of the metadata program. Currently, searches are made for phone numbers that are three steps from a number associated with a terrorist organization. The number of steps will now be reduced to two, Obama announced.

Obama wants to add some form of judicial review with the FISA (Foreign Intelligence Surveillance Act) Court before this database could be queried.

The Foreign Intelligence Surveillance Court (FISC) was set up in 1978 to handle cases that involved classified information. The court is like other U.S. courts except it does work that regular courts can’t handle.

Stops Spying on Heads of State
The president has ordered NSA to stop spying on the communications of heads of state and governments of our close allies unless there is some compelling national security purpose.

The United States will extend certain privacy rights to foreign people that hitherto were afforded only to Americans. The Director of National Intelligence, in consultation with the Attorney General, will develop this unprecedented protection.

The CSP considers expanding citizen privacy rights to non-U.S. persons outside the United States “a dangerous proposal,” not supported by the U.S. Constitution. But the president sees the need to win the trust of foreign nations who are disturbed at having their phone calls monitored.

Mr. Obama said much of the criticism of NSA was unjustified. But he said it was important to have this debate.

“I’ll admit, the readiness of some to assume the worst motives by our government can be frustrating,” Obama said near the end of his remarks.

In general, he said he values the work of the men and women at NSA, but wants to add safeguards to ensure privacy and civil liberties will not be compromised in the future.

However, the president knows that as a result of the disclosure of NSA’s massive domestic and foreign data collection programs, public confidence has been shaken.

Obama was sympathetic to concerns of abuse. He mentioned how in the 1960s, our government spied on civil rights leaders and critics of the Vietnam War, including Dr. Martin Luther King. He noted that today, routine communications around the world are within the reach of our intelligence agencies and that “prospect can be disquieting for all of us.”

Someone who is unpersuaded on the good attentions of NSA is James Bamford, who wrote the first book about the NSA, The Puzzle Palace (1982), and afterward, two more books on NSA.

Speaking Jan. 16 to a large audience at the National Press Club, Bamford said, “Whenever oversight of NSA is weakened, the agency begins to run amok by committing massive violations.” The statement is taken from an amicus brief in First Unitarian Church of Los Angeles v. NSA, which challenges the legality of the NSA’s telephone metadata surveillance.

Bamford discussed the violations in the 1970s when NSA targeted communications between anti-Vietnam War protesters. More recently, he said, “It happened following the attacks of 9/11 with the warrantless wiretapping program and many of the hundreds of other covert NSA operations targeting the communications of innocent Americans.”

The Review Group on Intelligence and Communications Technologies addressed how to use technical collection capabilities for protecting national security while at the same time respecting privacy and civil liberties.

The president used the panel as a sounding board to decide how to proceed after former National Security Agency contractor Edward J. Snowden’s disclosures. Obama adopted the main recommendations of the group, including overhauling the metadata program and restricting foreign intelligence collection.

University of Chicago Law Professor Geoffrey Stone, a member of the group, defended the metadata program Jan. 17 at Public Citizen’s headquarters. He called for the government not to hold metadata, a requirement that the president announced the next day.

Stone said the public holds the false impression that NSA sweeps up all our phone calls, but to his surprise, that is not true. The quantity is classified, which Stone thinks is unnecessary.

In 2012, only 288 numbers were queried, he said. A total of 6,000 calls were gleaned from the analysis of those 288 numbers. The fear that the public has of an Orwellian society is unfounded based on 2012 data, according to Stone, who is a member of the National Advisory Council of the American Civil Liberties Union.

Stone conceded though that there were no instances where “the information derived from the 215 program was essential in thwarting a terrorist act.” That was the Review Group’s position as well.

Sens. Ron Wyden (D-Ore.) and Mark Udall (D-Colo.) forced daylight on this issue when they challenged NSA to show the program’s effectiveness in June. “We remain unconvinced that the secret Patriot Act collection has actually provided any uniquely valuable intelligence,” they said in a June 7 joint statement.

However, Stone said it was “a sensible way to catch that one which is essential,” meaning another 9/11. If it stopped such an attack once a decade, it was worth doing, he said.

With reporting from the Associated Press