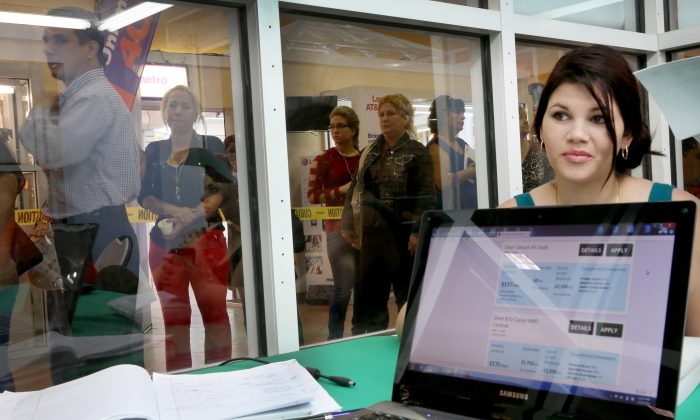 As people stand in line to speak with an insurance agent Dailem Delombard sits with an agent from Sunshine Life and Health Advisors as she tries to purchase health insurance under the Affordable Care Act at the kiosk setup at the Mall of Americas on January 15, 2014 in Miami, Florida. Today is deadline day for those that want insurance to start on February the 1st. According to the owner of Sunshine Life and Health Advisors, Odalys Arevalo, their business selling insurance under the Affordable Care Act has exploded so much so that by the end of the week they will be moving to a 24,000 square foot space at the mall because they have outgrown the kiosk. They have over 25 agents and are seeing hundreds of people daily, last Saturday they saw about 1,000 people with wait times of over 5 hours. (Photo by Joe Raedle/Getty Images)
Health News

The first half of the Obamacare open enrollment period is over, and last week, federal health officials announced sign-up figures from the first three months.

After a disastrous start, HealthCare.gov (which handles enrollment for 36 states) began functioning properly. It, along with state-run insurance exchanges, netted more than 2.1 million signups between Oct. 1 and Dec. 28.

But are sign-ups on pace to meet the Congressional Budget Office’s projection of 7 million this year? And is there an adequate balance between young and old, sick and healthy, to keep costs in line? That’s harder to say.

Here’s what we know:

Here’s what we don’t know:

Editor’s Note: This post is adapted from Ornstein’s “Healthy buzz” blog. Have you tried signing up for health care coverage through the new exchanges? Help us cover the Affordable Care Act by sharing your insurance story.