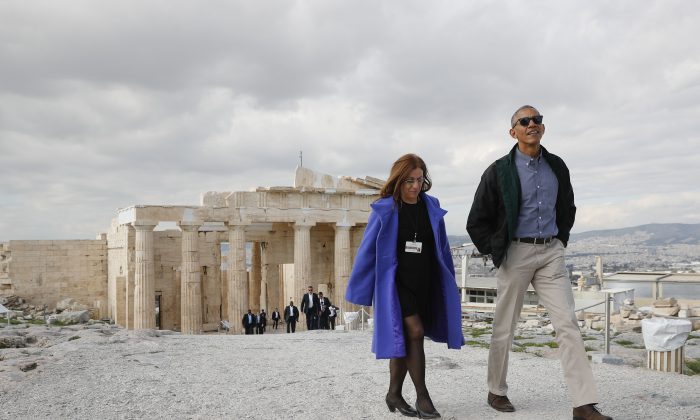 ATHENS, Greece—President Barack Obama toured Greece’s most famous ancient monument, the Acropolis citadel, and was due to deliver a speech to the Greek people later Wednesday as he winds up the first leg of his final foreign tour as president and heads from Greece to Germany.

Obama entered the complex through the Propylaea, the monumental gateway that serves as an entrance to the site, and walked along the Parthenon temple, which was dedicated to the goddess Athena, considered the patron god of the city of Athens. The U.S. president lingered at the base of the Parthenon, gazing up at the columns and glancing around at the panoramic view of Athens as he chatted with his guide, Eleni Banou of the Culture Ministry’s antiquities division.

The 5th Century B.C. Parthenon temple is surrounded these days by scaffolding as part of maintenance works. The entire site was closed to the public for the day for Obama’s visit, which has taken place amid draconian security measures that have also banned demonstrations in parts of Athens, and shut down roads and subway stations.

Greece’s government has hailed Obama’s visit—the first official visit of a sitting U.S. president since a 1999 trip here by Bill Clinton—as being of massive importance. It has pinned its hopes on him persuading some of the financially stricken country’s more reluctant international creditors to grant debt relief, as well as pressuring other European countries to share more of the burden of the continent’s refugee crisis.

Obama was receptive to Greece’s woes and repeated his belief that debt relief is necessary. He also stressed Greece must continue implementing painful reforms it signed up to in return for successive international bailouts. It is questionable how much of this stance will also be adopted by his successor, Donald Trump, following the latter’s election victory.

Speaking during a joint news conference with Greek Prime Minister Alexis Tsipras on the first day of his visit Tuesday, Obama explained Trump’s victory as a reaction against economic uncertainty, suspicion of elites and a desire to reign in the excesses of globalization, and said world leaders should pay attention to their citizens’ very real fears of inequality and economic dislocation.

“The more aggressively and effectively we deal with those issues, the less those fears may channel themselves into counterproductive approaches that can pit people against each other,” Obama said.

Obama’s words are being watched closely by world leaders who see parallels between Trump’s election and the rise of far-right and populist movements in their own countries amid continued economic anxiety.

Tsipras himself won elections last year on what critics say was a populist platform, though one on the left of the political spectrum. He pushed his formerly small radical left party onto the forefront of Greece’s tumultuous political scene by telling Greeks weary from six years of financial crisis and falling living standards that he would reject austerity measures imposed in return for the country’s bailouts.

But after the near collapse of negotiations with Greece’s creditors—other European countries using the euro currency, and the International Monetary Fund—Tsipras performed a political about-face, signing up to a new bailout and more austerity to prevent his country being forced out of the euro.

After his cultural tour, Obama was to deliver a speech to the people of Greece that is expected to touch on both the country’s efforts to emerge from its financial crisis, and on its role in dealing with hundreds of thousands of refugees who have crossed Greece’s borders on their way to more prosperous European countries. A reluctance by many other EU countries to host refugees has left more than 60,000 people stranded in Greece, many living in poor conditions in massively overcrowded camps dotted across the country.

On Tuesday, Obama acknowledged the impact of the financial crisis on Greece, which has wiped out a quarter of its economy and led to unemployment rates above 25 percent.

“I know this has been a painful and difficult time, especially for Greek workers and families, pensioners and young people. This crisis is not an abstraction, but has had a very concrete and devastating impact on the lives and livelihoods of millions of people across this country,” Obama said.

Security has been tight, with more than 5,000 police deployed, a ban on public gatherings and demonstrations in swathes of central Athens and near his seaside resort hotel, along with shutdowns of roads and subway stations when he has been on the move.

Despite the restrictions, riot police used tear gas and stun grenades Tuesday evening to disperse about 3,000 left-wing demonstrators protesting the visit after they tried to enter an area off-limits to gatherings. Police made at least four arrests and said one woman was slightly injured in the clashes, which took place far from Obama’s meetings.