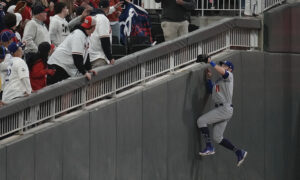 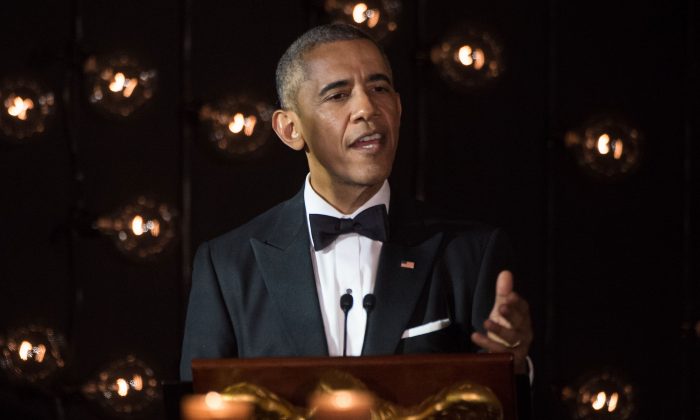 President Barack Obama speaks during a state dinner with Nordic leaders at the White House in Washington, D.C., on May 13, 2016. (Nicholas Kamm/AFP/Getty Images)
US

Obama to Urge Graduates to Pursue Progress in Changing World

WASHINGTON—President Barack Obama will urge this year’s graduates at Rutgers University to pursue positive change in the world despite a cascade of challenges from student loan debt to overseas turmoil.

Obama’s visit to the New Jersey campus on Sunday falls on the 250th anniversary of Rutgers, a public university that the White House has praised as a “remarkable institution of higher learning.” University leaders have been lobbying the president for years to deliver what will be the school’s first commencement speech by a sitting president.

White House spokesman Josh Earnest said Obama’s speech at High Point Solutions Stadium in Piscataway would focus on how the Class of 2016 can navigate the rapidly changing planet.

“These students are as well-prepared as any students have ever been to confront those challenges and use this changing environment to create a better world,” Earnest said. “That’s what makes the president so fundamentally optimistic about the future of our country, and that optimism is manifested quite well in this year’s graduating class at Rutgers.”

Obama to Welcome Nordic Leaders to the White House

In an unusual move, the president granted a pre-commencement interview to the Daily Targum, the college newspaper, after the editor-in-chief put Obama on the spot by requesting it on live television during a recent White House visit.

Quizzed about student loans and college affordability, Obama stressed that the modern economy will require highly educated workers, but he added that his ability to restructure financial aid was limited barring new laws from Congress.

“The basic principle that we should be working towards is that everyone needs more than just a secondary school education, whether it’s a two-year or four-year degree,” Obama said. “And that it’s got to be affordable. We can’t have situations where young people are loaded up with $50,000, $75,000 or $100,000 worth of debt coming out of school.”

Sunday’s address is the second of three commencement speeches that Obama will deliver during his final graduation season as president. Earlier in May, Obama told graduates at historically black Howard University that the country is “a better place today” than when he graduated from Columbia University more than 30 years ago. The president will also speak on June 2 at the U.S. Air Force Academy in Colorado Springs, Colorado.

New Jersey Gov. Chris Christie, who ran unsuccessfully for president before endorsing Donald Trump, won’t be attending the Rutgers speech. The Republican will be visiting nearby Princeton University to watch his son Andrew play Yale in the Ivy League baseball championship.