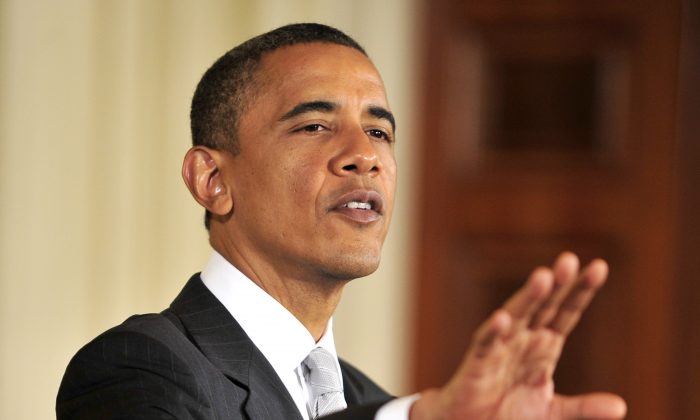 President Barack Obama gives a statement about the new National HIV/AIDS Strategy (NHAS) in the East Room of the White House in Washington, D.C., on July 13, 2010. (Ron Sachs-Pool/Getty Images)
US

Obama Will Tell Americans Not to Give Into Fear About Terrorism

WASHINGTON—In a rare Oval Office address, President Barack Obama on Sunday night will urge Americans to not give into fear following attacks in Paris and California, while trying to assure the public that he takes the threat of terrorism seriously.

Obama was not expected to announce major policy changes for targeting the Islamic State (ISIS). Administration officials said the president’s remarks would focus on how the terrorist threat has evolved and what steps the government is taking to keep Americans safe.


“I think what you’re going to hear from him is a discussion about what government is doing to ensure all of our highest priority—the protection of the American people,” Attorney General Loretta Lynch said in an interview with NBC’s “Meet the Press.”

“This horrific attack has people on edge and frightened. We’ve lost so many victims and people were wounded. People are concerned and we understand that,” Lynch said.

She said Obama may ask Congress to “to review measures and take action” to safeguard national security, though she did not offer specifics. She suggested he might reiterate his call for stricter gun laws. “Dealing with guns is one way to handle the violent crime issues that we have in this country,” Lynch said.

Senate Majority Leader Mitch McConnell (R-Ky.) said Obama has an opportunity “tell the American people how he is willing to adapt to the threat and how he can better prepare our nation for a fight that will inevitably be passed on to his successor.” McConnell called on Obama to outline plans for a ground force to dismantle ISIS and detail what legal authorities are needed to defeat encrypted online communication that law enforcement says can be used to evade authorities.

With the prime-time address, Obama was turning to a tool of the presidency that he has used infrequently. He’s made televised statements from the Oval Office just twice, the last in 2010.

His speech comes amid criticism that he has underestimated the threat from an extremist group that claimed responsibility for last month’s deadly attacks in Paris.

A woman held responsible for last week’s shooting in San Bernardino, California, had, under a Facebook alias, pledged allegiance to ISIS and its leader, according to U.S. official who was not authorized to discuss the case publicly and spoke on condition of anonymity. A Facebook official said the post came about the time the couple stormed the San Bernardino social service center.

Authorities said the woman—a 29-year-old originally from Pakistan—carried out the attack with her 28-year-old American-born husband, killing 14 people and wounding 21. The two were killed in a shootout with police hours after the attack.

Authorities say they believe the guns used by the attackers were legally obtained.

The FBI is investigating the massacre as a terrorist attack that, if proved, would be the deadliest by Islamic extremists on American soil since Sept. 11, 2001.

FBI Director James Comey has said there was no indication yet that the plot was directed by any other foreign terrorist group, though he would not rule out that future possibility.

Obama initially said the shootings could have been terrorist-related or an incident of workplace violence. Two days later, in his weekend radio and Internet address, the president said called the attacks an “act of terror” and said it was “entirely possible that these two attackers were radicalized to commit this act of terror. And if so, it would underscore a threat we’ve been focused on for years—the danger of people succumbing to violent extremist ideologies.”

Lynch said the kind of threats against the United States has evolved because the government has been able to foil plots. “We have come from a time of the large-scale planned al-Qaida-style attacks to the encouragement of lone wolves.’

Some of the Republican presidential candidates had quickly labeled the shootings an act of terrorism and faulted Obama for not saying so immediately. GOP candidates have sought to equate the president’s cautious language on terrorism with what they see as his tepid approach to national security.

“I don’t know why the president hesitates for so long to call it exactly what it is,” New Jersey Gov. Chris Christie said.

Florida Sen. Marco Rubio called on Obama to outline a more robust strategy for defeating ISIS, which has strongholds in Iraq and Syria. Rubio advocated a “ground force made up primarily of Sunni Arabs from the region, including Iraqis and Syrians, but also a contribution of troops from Jordan, Saudi Arabia, Egypt.”

Hillary Clinton, the front-runner for the Democratic presidential nomination, said the U.S. is “not winning” the fight against ISIS and it’s “too soon to say that we are doing everything we need to do.” While Clinton has been supportive of Obama’s foreign policy, given that she served as his secretary of state, she also has called for a more robust approach to defeating ISIS, including setting up a no-fly zone.

The president’s approach has relied largely on airstrikes by the U.S., as well as European and Arab partners. He has struggled to identify and train effective forces on the ground to supplement those efforts and has ruled out a large scale deployment of American troops.

Christie spoke on CBS’ “Face The Nation,” Rubio was on CNN’s “State of the Union” and Clinton appeared on ABC’s “This Week.”