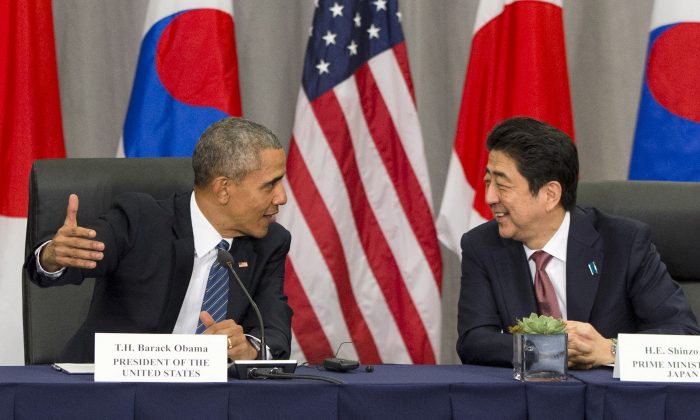 FILE - In this March 31, 2016, file photo, U.S. President Barack Obama speaks with Japanese Prime Minister Shinzo Abe during their meeting at the Nuclear Security Summit in Washington. Obama will travel to Hiroshima in May 2016 in the first visit by a sitting American president to the site where the U.S. dropped an atomic bomb. The White House says Obama will visit along with Abe during a previously scheduled visit to Japan. (AP Photo/Jacquelyn Martin, File)
US

WASHINGTON— In a moment seven decades in the making, President Barack Obama this month will become the first sitting American president to visit Hiroshima, where the U.S. dropped an atomic bomb, decimated a city and shot the world into the Atomic Age.

Obama will visit the site with Japanese Prime Minister Shinzo Abe during a previously scheduled trip to Japan, the White House announced Tuesday.

The president intends to “highlight his continued commitment to pursuing the peace and security of a world without nuclear weapons,” White House spokesman Josh Earnest said. Obama will not apologize, the White House made clear.

The president’s visit has been widely anticipated since U.S. Secretary of State John Kerry’s trip to the memorial to the Hiroshima bombing in April. Kerry toured the peace museum with other foreign ministers of the Group of Seven industrialized nations and participated in an annual memorial service just steps from the site’s ground zero.

Hiroshima Mayor Kazumi Matsui praised Obama’s plan to visit as a “bold decision based on conscience and rationality,” adding that he hopes Obama will have a chance to hear the survivors’ stories. He also expressed hope the visit would be “a historic first step toward an international effort toward abolishing nuclear weapons, which is a wish of all mankind.”

The U.S. attack on Hiroshima on Aug. 6, 1945, in the final days of World War II, killed 140,000 people. While it scarred a generation of Japanese, many Americans believe the bombing, along with another Aug. 9 on the city of Nagasaki miles away, hastened the end of the war. Japan announced it would surrender on Aug. 15.

Diverging views about an act that forever changed war have made a visit from a sitting U.S. president a delicate and arguably politically risky move. It took 65 years for a U.S. ambassador to attend the annual memorial service.

Still, Japanese survivors’ groups and anti-nuclear advocates have continued to press U.S. officials on the issue in an effort to illustrate the devastation of nuclear weapons. In the U.S., officials remain wary that such a visit could be perceived as an apology for an act believed to have saved American lives.

Early in his presidency, Obama said he would be honored to make the trip, and the White House has said it often considered a visit on previous trips to Asia. It has not explained why a visit there has never come together.

Asked last week whether the president believes an apology is warranted, Earnest was direct: “No, he does not.”

In a statement posted as the visit was announced, a senior White House official added that the president does not intend to wade into past debates.

“He will not revisit the decision to use the atomic bomb at the end of World War II. Instead, he will offer a forward-looking vision focused on our shared future,” deputy national security adviser Ben Rhodes said. “The United States will be eternally proud of our civilian leaders and the men and women of our armed forces who served in World War II for their sacrifice at a time of maximum peril to our country and our world. Their cause was just, and we owe them a tremendous debt of gratitude.”

Obama will be in Japan to attend the Group of 7 economic summit, part of a weeklong Asia tour that will also include a stop in Vietnam.