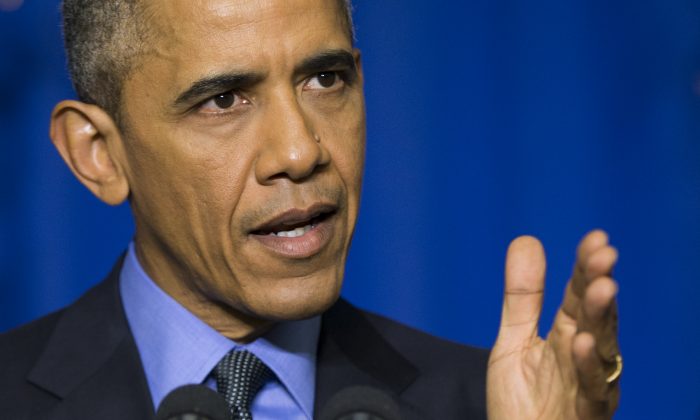 President Barack Obama speaks during a news conference at the Organization for Economic Cooperation and Development (OECD) center, in Paris, on Tuesday, Dec. 1, 2015. Obama discussed the COP21 climate change summit and the threat of terrorism from the Islamic State. (AP Photo/Evan Vucci)
US

Obama Says Parts of Climate Deal Must Be Legally Binding

LE BOURGET, France—President Barack Obama said Tuesday that parts of the global warming deal being negotiated in Paris should be legally binding on the countries that sign on, setting up a potential fight with Republicans at home.

Obama’s stand won praise at the U.N. climate conference from those who want a strong agreement to reduce greenhouse gas emissions from the burning of coal, oil and gas. But it could rile conservatives in Washington, especially if he tries to put the deal into effect without seeking congressional approval.

The Obama administration has pledged during the international talks to reduce U.S. emissions by up to 28 percent by 2025. But inscribing the emissions target in the Paris deal would probably require the president to submit the pact to the GOP-controlled Congress, where it would be unlikely to win ratification. Many Republicans doubt global warming is real or fear that stringent pollution controls could kill jobs.

So the administration is looking to keep the targets out while including binding procedures on when and how countries should periodically review and raise their targets.

“Although the targets themselves may not have the force of treaties, the process, the procedures that ensure transparency and periodic reviews, that needs to be legally binding,” Obama said in Paris, “and that’s going to be critical.”

Sen. Jim Inhofe (R-Okla.), chairman of the Senate Environment and Public Works Committee and a fierce critic of Obama’s policies, fired back immediately.

“The U.S. Senate will not be ignored. If the president wishes to sign the American people up to a legally binding agreement, the deal must go through the Senate,” he said in a statement. “There is no way around it.”

The White House previously said parts of the deal should be legally binding, but this is the first time Obama has said it himself and spelled out which ones.

Obama’s comments brought relief to the French hosts of the conference, who were worried about whether the U.S. wanted a binding deal at all after Secretary of State John Kerry told The Financial Times that the agreement was “definitely not going to be a treaty” and that there was “not going to be legally binding reduction targets.”

“The fact that the United States of America could commit to a binding agreement, whilst before there was a doubt because of Congress, is really extraordinary news that comes at a good time,” French Environment Minister Segolene Royal said.

Senate Majority Leader Mitch McConnell and other top Republicans have warned other countries not to trust any deal Obama may strike. Other GOP politicians moved to block Obama’s plan to force steep cuts in greenhouse gas emissions.

At a news conference, House Speaker Paul Ryan was asked whether Congress was out of step with public opinion on climate change.

At the Paris talks, the European Union has called for a legally binding agreement with emissions targets, but observers said it is likely to drop that demand over the next two weeks of negotiations to make sure the U.S. can join the deal.

“I think at end of the day everyone knows that for the U.S. to be part of this, it can’t have the emissions target itself legally embedded in the treaty,” said Alden Meyer of the Union of Concerned Scientists.

Nigel Purvis, a former U.S. climate negotiator and president of the non-governmental organization Climate Advisers, said Obama has all the legal authority he needs to enter an agreement where only some elements are binding.

Obama on Tuesday also announced a U.S. contribution of $30 million to help make insurance against climate-related damage available in the Pacific, Central America and Africa.

Earlier in the day, the president met with leaders of small island nations who fear their countries will be swallowed up by rising seas. The Hawaii-born Obama said he understands the beauty and fragility of island life and called their populations “among the most vulnerable to the ravages of climate change.”

“The world, and in particular the developed world, owes the African continent an environmental debt,” he said.

African leaders also stressed the need to do something about the Lake Chad region, where the Islamic extremist group Boko Haram has been carrying out bloody attacks. The lake, surrounded by Chad, Cameroon, Niger and Nigeria, has shrunk as much as 90 percent since 1960, changing the lives of farmers, fishermen and herders. Some say the increasing desperation is driving people into the extremists’ ranks.

The talks, which run through Dec. 11, are aimed at a broader, tougher replacement to the 1997 Kyoto Protocol. That treaty required only rich countries to cut their emissions, while this time the goal is for everyone to pitch in.

After protesters clashed with police earlier this week, Paris police on Tuesday extended a ban on public demonstrations around the climate conference until it is over.