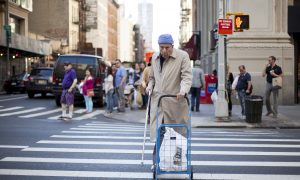 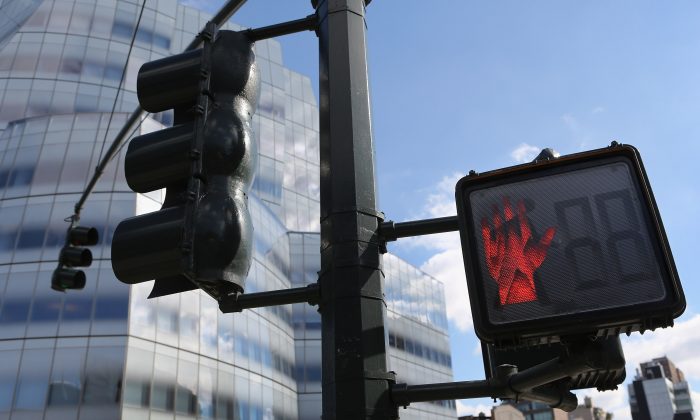 A pedestrian traffic light in New York City, Oct. 18, 2012. The city has been pushing for home rule regarding traffic cameras and speed limits, which are set by the state. (John Moore/Getty Images)
New York

In addition to New York City’s allotted 20 speed cameras, the city has a number of red light cameras that need reauthorization from the state this year.

Currently the city is allowed red light cameras at 150 intersections with undisclosed locations.

According to the Department of Transportation, there was a 56 percent decrease in serious injuries and a 40–60 percent drop in red-light violations at intersections with red light cameras.

Two state bills were passed last month to the Transportation committees in the Senate and Assembly. Assemblyman Carl Heastie proposed an amendment to increase the 150 intersections to 225 and to reauthorize the program. Sen. Tony Avella proposed to increase the number of cameras to 250 but did not include reauthorization.

UPDATE: In response to the Epoch Times article, Avella’s office emailed a statement on his intention to amend his bill to reauthorize the program. In addition, “It is listed as a pilot program, the Senator will try and change that to make it permanent,” the statement reads.

Without reauthorization, the red light pilot program would expire in 2014.

New York was the first city in the United States to use red light cameras as traffic enforcement in 1992. From 1994 to 2009, the city earned $89 million from the program.

“The premise of the Albany legislation is that this is a pilot program,” the legislative director for Transportation Alternatives, Juan Martinez, said. “It’s been around for decades, we know it works. It’s time to end the pilot program.”

Traffic safety advocates and community members said this is just one of the many roadblocks the city has run into with the state.

The number of traffic cameras—including red light cameras and speed cameras—and the citywide speed limit are both measures controlled by the state. Vision Zero, which will have a defined roadmap set by various agencies by Feb. 15, includes pushing for city control of these measures.

In the past two weeks 900 speeding tickets were generated by the six speed cameras, the DOT announced on Jan. 31. The city is permitted to install 20 in total as a pilot program, but residents said it is not enough.

At a community board meeting with the DOT in January, residents had asked for a traffic camera at the recently dangerous intersection of West 96th Street and Broadway. Ryan Russo with the DOT had responded that would mean taking a camera away from another intersection.

“This is another clear example of where NYC needs home rule,” said Keegan Stephan of Right of Way. “If … drivers knew they would get tickets when they speed or run red lights, these rampant, deadly traffic violations would finally come to an end.”

Sen. Martin Dilan recently proposed a Senate version of a bill proposed by Assemblyman Daniel O’Donnell that would allow the city to reduce its speed limit by 10 mph. In a day, Stephan sent out word and about 100 community members rallied in Grand Army Plaza to show their support for the home rule measure.

The citywide speed limit is 30 mph except where posted, but under state law the city is allowed to lower the speed limit to 15–24 mph within a quarter mile of schools.

According to a WNYC map that means about 55 percent of the city’s streets, but lowering speed limits means posting new speed limit signs street by street.

“We could do it one school at a time, or authority from the state could just let us set our own speed limits,” Martinez said.

Critics of lowering the speed limit said there would be a higher need for enforcement. Others said it’s a matter of education.

“I know a woman who came home and found a speeding ticket in the mail,” said Kate Steinberg at Grand Army Plaza Sunday. “She didn’t even know she was speeding.”

Steinberg said she had been brought to the realization of how frequent and dangerous traffic incidents are just recently with the death of a family friend’s son, Samuel Cohen Eckstein.

Like her neighbor who had received the speeding ticket in the mail, many drivers aren’t aware of the speed limit, Steinberg added. But the $50 ticket lets them know.

“I’d like to see more of that,” Steinberg said.

Golden has been vocal about halting legislation for more speed cameras.

As for the red light cameras, Golden said he can’t be convinced they work until the DOT shows him the numbers.

The city has the authority to add more signage and traffic calming measures like speed bumps, Golden said, “but we’re [State] going to do that anyway.”

“I look forward to working with the new mayor on that,” Golden said.