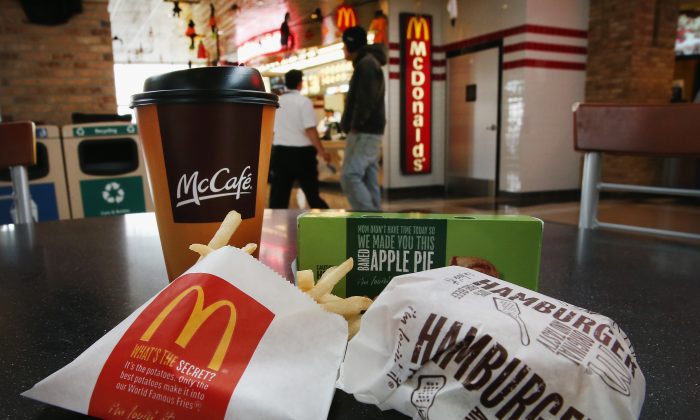 A McDonald's meal is at a restaurant in Des Plaines, Ill., in 2013. (Scott Olson/Getty Images)
New York

The city’s Health Department will propose Wednesday that all chain restaurants add a salt-shaker-like symbol on menus next to products that contain more than the recommended daily limit of 2,300 milligrams of sodium, about 1 teaspoon of salt.

Public health advocates hailed the proposal as a pioneering step to tackle a major problem. Salt producers called it off-base, and some restaurateurs said it would needlessly mire already burdened eateries in more bureaucracy. But City Health Commissioner Dr. Mary Travis Bassett said it simply would give customers important information.

There’s a wide variety of food items that would require the warning label under the proposed guidelines. At Panera Bread, for example, the Italian combo sandwich—which includes seared steak, smoked turkey, ham, salami, and onions—has 2,830 mg of sodium, while the sesame jack chicken strips at TGI Friday’s contains 2,700 mg of sodium.

This doesn’t change the food. It enables people to identify single items that have a level of salt that is extremely high.
— Dr. Mary Travis Bassett, commissioner, Health Department

“This doesn’t change the food. It enables people to identify single items that have a level of salt that is extremely high,” she said.

If the city Board of Health votes Wednesday to consider the proposal, a final vote could come as soon as September and the warnings by December.

Overconsumption of sodium increases the risk of high blood pressure, which can lead to heart attack and stroke. The average American consumes about 3,400 milligrams of sodium each day; only about one in ten Americans meets the 1 teaspoon guideline.

“High sodium levels are probably the biggest health problem related to our food supply,” said Michael Jacobson, executive director for the Center for Science in the Public Interest, a Washington-based advocacy group.

While he hailed New York’s proposal as “showing true leadership,” he also called it a conservative approach, given that items would get special labels only if they have a full day’s worth of sodium. A meal with even half that amount would still have too much salt, he said.

The head of the Salt Institute, a trade association for salt producers, called the proposal “misguided” and based on “faulty, incorrect government targets” discredited by recent research.

“They’re too low … and if followed, could actually harm people,” said the group’s president, Lori Roman.

Last year, a large international study questioned the conventional wisdom that most people should cut back on salt, suggesting that the amount most folks consume is OK for heart health. The study followed 100,000 people in 17 countries and found that very high levels of salt were a problem, especially for people with high blood pressure, but too little salt also can do harm.

Other scientists fault the study and say most people still consume way too much salt.

“The composition of menus may soon have more warning labels than food products,” she said.

But at least one restaurant chain expressed support for the city’s plan. Panera Bread advocates providing nutritional information with menus, and the New York proposal is “aligned with that same goal,” CEO Ron Shaich said in a statement. He said he hoped such initiatives would prompt national and industrywide labeling requirements.

“These are necessary to create real change,” he said.

Studies have found that the vast majority of dietary salt comes from processed and restaurant foods. The U.S. Food and Drug Administration has been pressing the food industry to reduce sodium content voluntarily and is working on new sodium guidelines.

Under former Mayor Michael Bloomberg, New York led development of salt-reduction targets for various table staples and got companies to start committing to them voluntarily, starting in 2010.

Many companies said they were able to shrink the salt without customers complaining, but that wasn’t always the case. Two years after it announced in 2009 that it was lowering salt in half its soups, the Campbell Soup Co. brought back some higher-sodium soups, citing concern about the taste.

New York City made a series of groundbreaking healthy-eating moves during Bloomberg’s tenure: banning trans fats from restaurant meals, forcing chain eateries to post calorie counts on menus, and trying, unsuccessfully, to limit the size of some sugary drinks. While city officials and health experts applauded the initiatives, some critics saw them as nannyish.