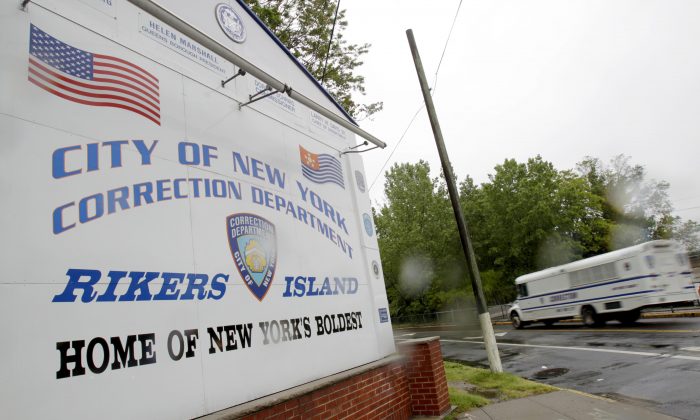 A bus drives past the the entrance to Rikers Island in New York. Overall performance of the private health care provider for New York City's jails failed to improve last year amid heightened scrutiny over inmate deaths that put the company's contract under review, according to an evaluation obtained by The Associated Press. (AP/Seth Wenig)
US

NEW YORK—New York City is dumping the private company that delivers health care in its jails after a year of scrutiny over high-profile deaths of mentally ill inmates and a city probe that found the company hired felons and provided questionable care.

Corizon Health Inc.’s contract, which is set to expire Dec. 31, won’t be renewed and instead the city’s public hospital system will run medical and mental health care for the roughly 70,000 inmates who pass through Rikers Island and other city jails every year, Mayor Bill de Blasio said in a statement.

“We have an essential responsibility to provide every individual in our city’s care with high-quality health services — and our inmates are no different,” he said in the statement before a planned Wednesday news conference.

The announcement comes as city Department of Investigation Commissioner Mark Peters revealed the findings of a monthslong probe into the Brentwood, Tennessee-based company, the nation’s biggest for-profit correctional health provider, which has been under contract with the city since 2001.

A company spokesman hasn’t responded to a request for comment. Company officials have previously said they try to give the best possible care in the jails, which is a notoriously difficult task given the wide range of health problems inmates often face, many even before they come into custody.

Corizon, and Rikers, have come under increased scrutiny since a series of reports by The Associated Press revealed the horrifying deaths of mentally ill inmates in recent years, including one who an official said “basically baked to death” in a sweltering cell and another who died after he was ignored for days, during which time he sexually mutilated himself. The AP first reported last fall that city officials were reviewing Corizon’s contract after a story found 15 inmate deaths since 2009 deemed medical in nature in which investigators found quality and timeliness of care was a factor.

The DOI report released Wednesday takes an in-depth look at Corizon’s hiring practices, concluding that its background checks of new hires — which in some cases were nonexistent — failed to fully account for prospective workers’ financial, criminal and professional histories, leaving them susceptible to corruption.

The report further concluded that persistent communication problems between the Department of Correction, which runs the jails, the Department of Health and Mental Hygiene, which oversees inmate care and Corizon, which provides the care, has resulted in pervasive hiring problems.

The Department of Correction hasn’t conducted criminal background checks of the 1,100 fingerprinted Corizon employees working in city jails since at least 2011 — a problem it didn’t discover until DOI informed them of it last year.

The fingerprints of hundreds of Corizon employees sent by the company to the Department of Correction for full criminal background checks were ignored, apparently never forwarded to the state Division of Criminal Justice Services and not run through the jail’s own inmate intelligence databases, the report found. Investigators even discovered a 1-foot tall stack of Corizon employees’ fingerprints, stuffed into FedEx envelopes, on a former top Department of Correction official’s filing cabinet.

Even more concerning is that state officials stopped accepting physical fingerprints in 2010, moving to an electronic fingerprint system, the report found.

“Conversely, Corizon has never requested the results of any background investigation on its new employees or otherwise sought to obtain a new employee’s criminal history summary from DOC,” the report found.

After reviewing the files of 185 Corizon mental health workers, investigators found that in 89 cases, Corizon failed to conduct any kind of background check at all, hiring employees whose professional licenses were suspect and, in eight cases, employees with criminal records for kidnapping, murder and other crimes.

In one case, Corizon hired a mental health clinician who disclosed in his application that his law license had been suspended for 30 months, apparently without following up on the case. DOI investigators found court officials suspended his license after discovering he “misappropriated” $1,000 in client funds and mismanaged client trusts.

That clinician, who was recently disciplined for improperly handling a suicidal inmate, was arrested last April for his role in a yearslong mortgage fraud scheme involving a partially blind, 60-year-old client.