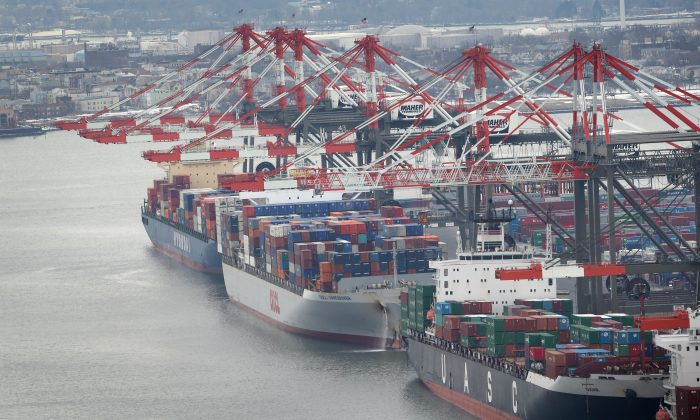 Container ships are docked in port as seen from the window of a Customs and Border Protection (CBP) in Port Newark, New Jersey, on Jan. 31, 2014. (John Moore/Getty Images)
New York

NEWARK, N.J.—From ultra-thin laptops to drones to smartphones, the shelves of big-box retailers overflow with gadgets to help us communicate and conduct business at greater and greater speeds.

What’s largely unchanged is the way many of those goods arrive on those shelves, as they did in the era of the rotary phone and transistor radio.

It’s a supply chain fraught with the potential for disruption, particularly in the sprawling ports that hug Newark Bay just east of the New Jersey Turnpike—an aging complex where weather, labor issues and even computer problems have caused significant delays in recent years. But other factors embedded in the process itself are a concern as the ports prepare to begin accepting larger ships when work to raise New Jersey’s Bayonne Bridge is finished in two years.

Once we start getting those 14,000-container ships, and possibly larger, we’re going to have to do it differently
— Molly Campbell, Port Authority of New York and New Jersey

Take, say, a gadget made in China. It would take about a month to reach the Port of New York and New Jersey. Once arrived, it can take nine days for the 20-foot cargo container carrying them to be unloaded; stacked; picked up by a truck, barge or train; and taken to a warehouse for distribution to stores.

“Once we start getting those 14,000-container ships, and possibly larger, we’re going to have to do it differently,” said Molly Campbell, director of port commerce for the Port Authority of New York and New Jersey. “Because of the enormity of just trying to move out the goods, we have to find a different way to do it, and it’s more than simply saying, ‘I’m going to raise the bridge’ or ‘I’m going to bring in more rail’ or ‘bring in more trucks.'”

In 2014, the ports handled cargo valued at about $212 billion, according to the Port Authority. The Port of New York and New Jersey is the busiest on the East Coast and second-busiest in the country, behind Los Angeles/Long Beach, California.

The operation at the Port Newark Container Terminal, one of several terminals at the port, is breathtaking in its size and scope, starting with the 350-foot-high cranes that unload the ships.

Straddle carriers, essentially shorter cranes with wheels, then stack the containers for pickup by trucks. The straddle carriers weigh 75 tons each and require special pavement so they don’t sink.

How Will the Proposed $20B New Hudson Tunnel Be Financed?

The terminal epitomizes both the port’s transformation and the steps still untaken. It is tearing down two warehouses and moving its office building to create more space, and is installing technology to streamline the systems for loading and unloading of trucks. It’s even building two wider cranes in a lot nearby, a process that will take two years.

“You can’t just go down the street and buy one of those at the appliance store,” said Jim Pelliccio, president of the Port Newark Container Terminal.

For all the time and money invested—about $230 million in the past several years—$120 million more is needed to fix up an unused and dilapidated berth where an additional ship could dock and be near a railroad link, Pelliccio said.

The Port Authority also has sunk significant capital into improving the system, including the $1.3 billion Bayonne Bridge elevation in preparation for bigger ships plying a widened Panama Canal, more than $2 billion for harbor deepening and $600 million for rail improvements.

The infrastructure upgrades won’t really pay off, Campbell cautioned, unless the port adapts by doing things like expanding the hours that truckers can pick up and unload containers.

“If we had a wish list and Santa Claus could bring it, it would be the expanded hours,” said Gail Toth, head of the New Jersey Motor Truck Association. “I don’t even want to see the larger ships yet; we can’t handle what we’ve got now.”

The delays can hurt retailers. When computer glitches at one of the New Jersey terminals caused backups in summer 2013, one retailer had 21 containers worth $2 million apiece stuck at the port, while another had 1.6 million boxes of back-to-school items that were delayed by weeks, according to the National Retail Federation, an industry advocacy group.

Whether those costs are passed on to consumers can depend on the product and the retailer, said J. Craig Shearman, a spokesman for the federation.

Ocean carriers can shift to different ports if congestion and delays become a problem, said Lawrence Gross, an expert with FTR, a freight transportation research firm. After West Coast labor troubles led carriers to shift more business to the East Coast this year, not all that freight returned west when the situation was resolved, Gross said.

That makes it even more crucial for the New York-New Jersey ports to be ready.

“I don’t want to be in a position where the industry’s changed because the carriers have done what’s best for them, where they’ve built these ships that are more efficient,” Campbell said. “They didn’t have the conversation that said, ‘What does that mean for you?’ It’s, ‘I’ve got (bigger) ships coming; do you want the goods? Adjust.'”