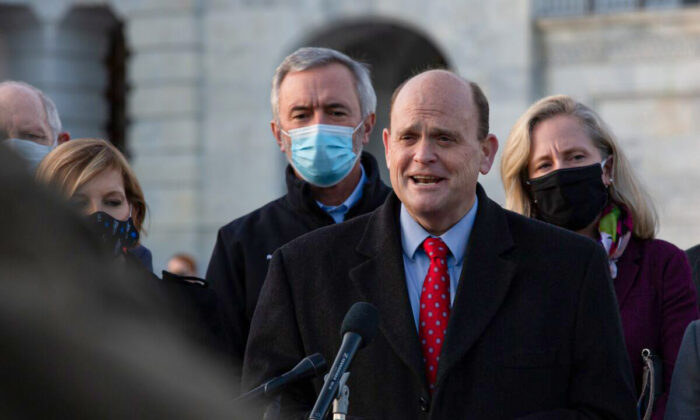 Rep. Tom Reed (R-N.Y.) announced he is resigning from Congress on Tuesday, stating in a lengthy speech that he was proud to have “put people before politics.”

The sudden resignation comes after Reed announced in March last year that he would no longer be seeking office in 2022 and apologized to a former lobbyist who accused him of sexual misconduct.

Reed’s office confirmed in a news release to reporters on May 10 that he will be joining the Washington, D.C.-based lobbying firm, Prime Policy Group.

“After almost 12 years in Congress, today is my last day,” Reed said on the House floor on Tuesday. “It has been an honor to serve with you all from both parties. I love this institution as it still exemplifies what is best about our government, we are the people’s House. While I am proud that we put people before politics, there is much more to do. I am leaving to continue that work and hope to have a greater impact on our country.”

The lawmaker went on to cite an 1858 Abraham Lincoln remark: “A house divided against itself cannot stand but I add, a house united will not fail,” while referencing extremism and tensions between Democrats and Republicans.

“It is time for petty political posturing to end,” Reed said. “My most profound appreciation is for the people of Western New York. Thank you for giving a country lawyer, the youngest of 12, raised by a single mother whose father passed away when he was only 2, the honor of representing you at the highest level. Only in America can such a dream come true.”

Reed, a married father of two, announced over a year ago that he was considering a run against New York Gov. Andrew Cuomo, who later stepped down from his role in light of a number of sexual misconduct allegations made against him.

His decision came after Nicolette Davis, an Army second lieutenant, accused the GOP congressman of sexually harassing her on a networking trip in 2017.

Davis told The Washington Post that she had been working as an insurance lobbyist when the incident occurred at an Irish pub in Minneapolis while she was seated next to Reed.

She alleged that Reed “drunkenly” touched her back, placed his hand outside her blouse and unhooked her bra strap before placing his hand on her thigh, and “inching upward.” Davis said that she asked a person seated nearby for help and they escorted Reed out of the building.

“First, I apologize to Nicolette Davis. Even though I am only hearing of this matter as stated by Ms. Davis in the article now, I hear her voice and will not dismiss her. In reflection, my personal depiction of this event is irrelevant,” he wrote.

“Simply put, my behavior caused her pain, showed her disrespect, and was unprofessional. I was wrong, I am sorry, and I take full responsibility.”

Reed in his statement also apologized to his wife, children, family members, colleagues, supporters, and “the people of the 23rd District.”

The congressman also stated that the incident occurred “at a time in my life in which I was struggling,” noting that he was battling with alcoholism at the time and that he entered treatment in 2017 and has been recovering since.

“This is in no way an excuse for anything I’ve done.” he wrote. “As I go forward, I will strive to be a better human being, continue to fight for what I believe in, and to make people’s lives better in any way I can. I hope this formal apology is just the start.”

Reed is one of 18 House Republicans who will not be contesting their seats in this year’s midterm elections. So far, 32 House Democrats have said they will not be seeking reelection.

Following Reed’s announcement on Tuesday, Prime Policy Group confirmed that he will be joining them, noting that his membership of the tax-writing Ways and Means Committee will “be invaluable to our clients and enhance the firm’s strategic capabilities.”

“Tom has always practiced reaching across the aisle to find consensus and achieve results, and we look forward to him bringing that same spirit and effectiveness to our team at Prime,” the firm’s Chairman, Rich Meade, said in a statement to Rollcall.