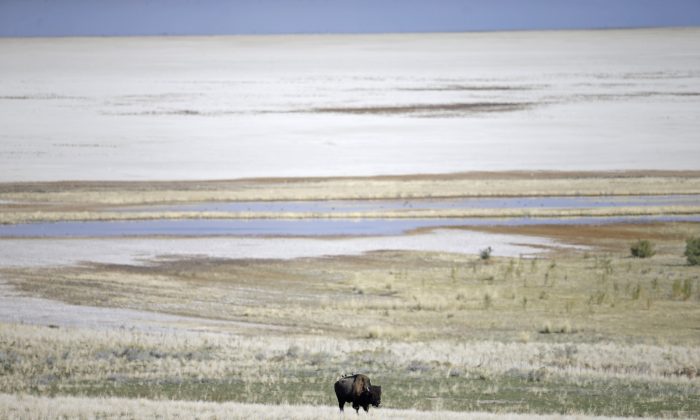 A bison grazing during an annual bison roundup of one of the country's largest and oldest public herds, on Antelope Island, Utah, on Oct. 23, 2015. Antelope Island is on the Great Salt Lake, about 50 miles north of Salt Lake City. (AP Photo/Rick Bowmer)
US

SALT LAKE CITY—Drought has caused water levels in the northern portion of Utah’s Great Salt Lake to drop to a historic low for the second year in a row, according to state and federal officials.

With lower lake levels, the ecosystem in and around the lake has shifted and left officials watching closely for effects on wildlife, recreation, mining and air quality.

Water levels on the lake have varied for decades. In 2011, an unusually high snowpack caused water levels to rise 5 feet, according to U.S. Geological Survey scientist Cory Angeroth. But water levels have dropped every year since then as the state received below-average participation.

The larger northern branch of the lake, which is physically separated from the southern portion by a causeway, is also hovering around historic lows. Angeroth said if Utah doesn’t see an above average snowpack this winter, the lower part of the lake could hit 4,191.35 feet, a low record set in 1963.

“Some of the islands—they’re no longer islands,” said Laura Ault, a lands manager with the Utah Division of Forestry, Fire and State Lands.

“A lot of the birds, once they leave their nest, if they’re disturbed, they won’t come back,” she said.

Ault said the record low also means the Forestry, Fire and State Lands Division will not issue any new or expanded permits for mining companies that pump brine out of the lake because it could exacerbate low water levels. The companies extract salt from the brine and it’s used for fertilizer or melting ice on roadways, among other products.

The smaller northern arm of the lake is separated from the southern arm by the Union Pacific Railroad’s 21-mile causeway.

Two culverts had historically allowed water to flow between the two branches, but those were closed in recent years after the railroad reported they were sinking into the lakebed.

The railroad plans to start construction next year on a 180-foot bridge to break up the causeway, allowing water to again flow back and forth and put the north and south water levels on par.