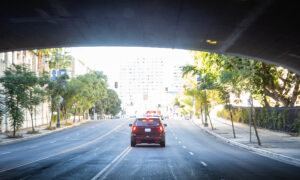 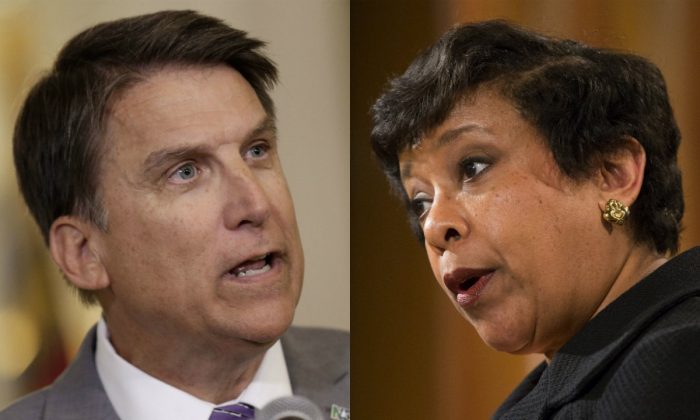 North Carolina Governor Pat McCrory and Attorney General Loretta Lynch announced federal lawsuits against each other on May 9 over the so-called “bathroom law.”

North Carolina state law bans people from using bathrooms and changing rooms at public agencies, including schools, that don’t correspond to the sex stated on their birth certificate. Changing sex on a birth certificate usually requires a sex-change surgical procedure.

The Justice Department asked the state to stop enforcing the law by May 9 or face federal lawsuit. McCrory responded by filing a lawsuit against the department. Lynch then announced the department will counter sue.

Lynch said the department retains the option of curtailing federal funding to the state’s Department of Public Safety and the University of North Carolina. She said, however, that the department remains open to resolve the issue with the institutions before stopping any funds. She wouldn’t specify when the department would withhold any funding.

Vanita Gupta, the justice department’s principal deputy assistant attorney general, sent a letter last week to North Carolina officials saying the law, dubbed HB 2, violates rights of transgender state employees, since they can’t access bathrooms that match the gender they consider themselves to be. Gupta demanded that the state stop enforcing the law and notify state and public employees they can use bathrooms and other facilities that correspond to how they self-identify.

If the state failed to do so, Gupta stated she “may apply to the appropriate court for an order that will ensure compliance” with federal laws.

The federal laws she’s referencing are Title VII of the Civil Rights Act of 1964, Title IX of the Education Amendments of 1972, and the Violence Against Women Act of 1994. The former two prevent discrimination based on religion, race, color, or national origin. They don’t mention gender.

Multiple federal agencies interpreted the HB 2 law to include discrimination based on gender identity under the protected class of sex.

Both McCrory and Gupta mention court cases that ruled in their favor—either confirming or rejecting that gender identity is included in the protected class of sex. It seems courts may see the matter either way, depending on the circumstances.

The third provision, the Violence Against Women Act (VAWA), specifically states that no one can be discriminated against for their gender identity under any programs or activity that receives funding under the act.

McCrory’s lawsuit states the VAWA doesn’t apply, because the HB 2 law “allows accommodations based on special circumstances, including but not limited to transgender individuals.” Such accommodations may include making a single-occupancy bathroom or changing facility available on request.

McCrory said, after receiving the Gupta’s letter, he asked the department for more time. Since the governor can’t single-handedly abolish the law, he would be forced to defy the law.

The justice department promised an additional week if McCrory would “publicly agree with their interpretation of the federal law,” he said.

In response, McCrory filed the lawsuit against the Justice Department.

McCrory said the department’s letter effectively put the whole nation on notice as to how the issue should be handled under federal law.

But he said he didn’t agree with the department’s interpretation of the law. He said he’d rather have a court, not a federal agency, decide.

He also asked Congress to “bring clarity” to the federal anti-discrimination laws.

McCrory stated in a Tweet his lawsuit “seeks to ensure that NC continues to receive federal funding until the courts clarify federal law & resolve this national issue.” Lynch said the department still retains the option to deny the funds.

Our lawsuit seeks to ensure that NC continues to receive federal funding until the courts clarify federal law & resolve this national issue.

Both parties seek a declaratory judgement, meaning asking the court to declare how the matter stands “without ordering anything be done or awarding damages,” according to uslegal.com.