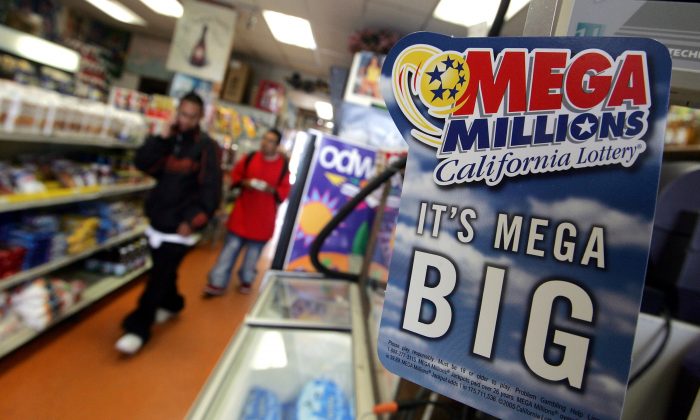 An advertisement for the Mega Millions lottery is seen in San Francisco, Calif., on June 23, 2005. (Justin Sullivan/Getty Images)
US News

No Winner in Mega Millions Drawing, Jackpot Climbs to $418 Million

A jackpot for the Mega Millions lottery climbed to an estimated $418 million, the fourth largest in the game’s history, after no tickets matched all six numbers during Tuesday’s grand prize drawing, lottery officials said.

But lottery players will have another chance to strike it rich on Wednesday when Powerball holds its next drawing for an estimated $440 million prize, with a cash value of $278 million. That amount marks the ninth largest jackpot in the game’s history, according to figures on the Powerball website.

The odds of a single ticket hitting all six numbers in the Powerball are 292 million to one, according to the Multi-State Lottery Association.

No one has hit the Powerball jackpot since Oct. 25, when a player in Louisiana won $191 million jackpot, the game said.

No one has won the Mega Millions jackpot since Oct. 13 when $42 million was shared by winners in Michigan and Rhode Island, the game said on its website.

The estimated $418 million prize, with a cash value of $278 million, will be up for grabs when the next Mega Millions drawing is held on Friday. The odds of hitting the Mega Millions jackpot are 303 million to one, the game said.

The cash value figures of both games are the estimated total if a winner selects one lump-sum payment, rather than the other option of taking annual payments.

Both estimated totals are before any taxes are assessed.

The largest Powerball jackpot was $1.6 billion payout split among winners in California, Florida and Tennessee in January 2016. The largest Mega Millions jackpot of $656 million was won in 2012.