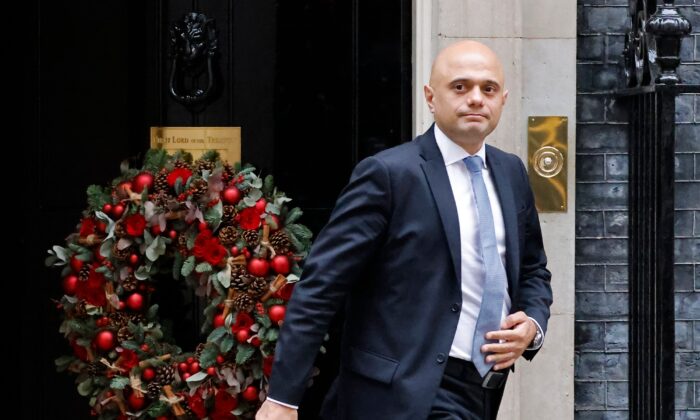 No further CCP virus restrictions will be introduced in England, at least before the new year, UK Health Secretary Sajid Javid confirmed on Monday.

The decision comes after Prime Minister Boris Johnson was briefed on the impact Christmas mixing had had on CCP virus infections and hospital admissions.

Speaking to Sky News on Mondy afternoon, Javid said ministers had continued to look at the data on a daily basis and decided there wasn’t “any need for any further measures until the new year.”

“Of course people should remain cautious as we approach New Year’s celebrations, and take a lateral flow test if that makes sense, celebrate outside if you can, have some ventilation indoors if you can. Please remain cautious,” the health secretary said.

“And when we get into the new year, of course, we will see then whether we do need to take any further measures, but nothing more until then at least,” he said.

Sajid said the ministers believe some 90 percent of the COVID-19 cases across England had the Omicron variant of the CCP (Chinese Communist Party) virus, suggesting the fast spread may offset some of the benefits of the variant being milder.

He added that the UK is “very focused” on vaccinations—with three-quarters of the eligible adults already boosted with a third dose—and has started the antivirals program, both of which he said would contribute to limiting the spread of the virus.

“But we’ll watch the situation very carefully, and should in the future we need to act, of course, we won’t hesitate to do so,” Javid added.

The UK government, which is responsible for public health policy in England, introduced mandatory NHS COVID passes in nightclubs and large events, and reintroduced mask mandates in most indoor settings after the Omicron CCP virus variant was found in the country, but the government has resisted calls for further restrictions, while Conservative backbenchers ramped up resistance against more lockdowns.

All other nations across the UK have announced more restrictions before Christmas that came into effect on Sunday and Monday.

Two-metre social distancing is being required in public premises and offices, and nightclubs have been ordered to close.

In Scotland, large events will require one-metre physical distancing and will be limited to 100 people standing indoors, 200 people sitting indoors, and 500 people outdoors.

One-metre physical distancing is also in place in all indoor hospitality and leisure settings, where table service is required where alcohol is being served.

Nightclubs have also been ordered to shut for three weeks from Monday.

In Northern Ireland, indoor standing events are no longer permitted and nightclubs will be closed on New Year’s Eve.

People must remain seated for table service, while table numbers will be limited to six.