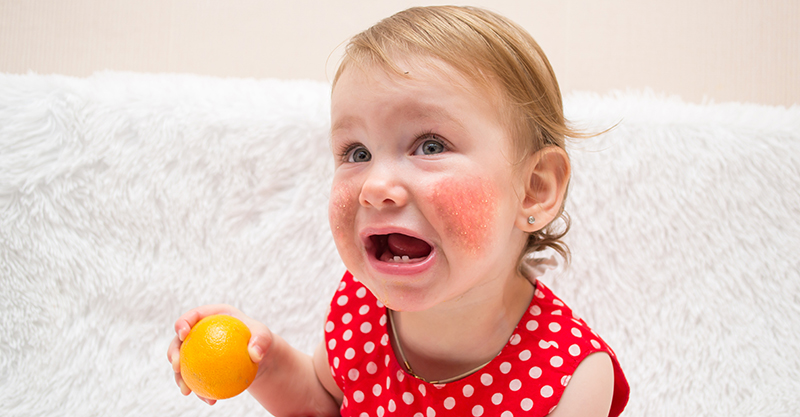 No Enigma: Vaccines and the Food Allergy Epidemic

The United States faces an ever-worsening food allergy epidemic. An estimated 1 in 12 children (8 percent) have food allergies, and prevalence has risen by at least 50 percent since 1997. Childhood food allergies are the most common cause of anaphylaxis (a “severe allergic reaction that is rapid in onset and may cause death”). A decade-long analysis of billions of health care claims reported a nationwide increase of 377 percent in claims for anaphylactic food reactions, and a separate analysis of emergency department (ED) visits over roughly the same period documented a 214 percent increase in visits for food-induced anaphylaxis—observed in children of all ages but with the highest rates in infants and toddlers. Peanut and tree nut allergies—which have tripled since 1997—are the most frequent triggers of ED visits for anaphylaxis, and over a third (35 precent) of the children who experience peanut-related anaphylaxis do so following their very first exposure.

… multiple strands of published evidence—including experiments dating back over a hundred years—indicate that injected vaccines are major culprits.

Whereas there is widespread agreement that these food allergy trends spell out bad news for children and families, there is little consensus on the epidemic’s supposedly “enigmatic” causes. This declared bafflement is itself puzzling because—as Children’s Health Defense has written previously—multiple strands of published evidence—including experiments dating back over a hundred years—indicate that injected vaccines are major culprits. The massive expansion of the vaccine schedule since the late 1980s, day-of-birth hepatitis B vaccination, changes in vaccine technology and the growing use of immune-dysregulating aluminum adjuvants are all factors that can explain the immune system overactivation currently manifesting in the form of food allergies. In addition, as discussed in a new article in the International Journal of Pharmaceutical Research, proteins in vaccines often produce “off-target immune responses” and, concerningly, these protein components are entirely untested and unregulated.

Japan chose to remove gelatin from vaccines two decades ago after confirming a relationship between the protein’s presence in vaccines and anaphylactic and allergic reactions. Not so in the U.S. …

Scientists use a variety of components to prepare vaccines—“active immunizing antigens, conjugating agents, preservatives, stabilizers, antimicrobial agents, adjuvants and culture media…as well as inadvertent contaminants that are introduced during vaccine handling.” Researchers acknowledge that any of these components is capable of triggering an allergic reaction, but they believe that proteins such as egg and gelatin may be especially likely to do so.

In fact, allergic reactions to gelatin are well known, “especially in injected medications and vaccines.” Japan chose to remove gelatin from vaccines two decades ago after confirming a relationship between the protein’s presence in vaccines and anaphylactic and allergic reactions. Not so in the U.S., which still includes gelatin in the measles-mumps-rubella (MMR), varicella (chickenpox) and other vaccines, despite documented anaphylactic reactions related to the gelatin in vaccines. Concerns recently intensified following the news that gelatin is now a vehicle for the introduction of glyphosate into vaccines. Researchers Anthony Samsel and Stephanie Seneff, who brought this problem to the public’s attention in a seminal 2017 publication in the Journal of Biological Physics and Chemistry, noted that vaccine manufacturers grow vaccine viruses on gelatin sourced from cows and pigs who consume large amounts of glyphosate-contaminated genetically modified (GM) feed.

In the 2019 Pharmaceutical Research study, the authors’ use of protein sequencing methods shows that it is not just animal proteins in vaccines that are problematic; the sequencing data indicate that at least five plant proteins present in vaccines (soy, peanut, sesame, maize [corn] and wheat) are likewise capable of fostering food allergies. The authors explain that when scientists add powerful aluminum adjuvants to vaccines, the “boosted immune response” becomes a blunt weapon. Far from engendering a carefully controlled immune response directed solely against the targeted virus or bacterium, adjuvant-enhanced vaccines also end up triggering antibodies against “non-targeted” plant proteins. When this happens, there is a “high probability” that the antibodies will cross-react with similar human proteins—with pathogenic consequences. This type of overactive immune response can easily explain not just the epidemic of “food-associated immune-mediated disorders” but also the dreadful rise of autoimmune and neurodegenerative disorders.

One of the authors’ principal findings is that there is “strong sequence alignment” (regions of similarity) between the five plant proteins and human glutamate receptors. Although glutamate is the body’s most abundant neurotransmitter, it follows the “Goldilocks Principle,” requiring the release of “just the right amount” of glutamate in “the right places for only small amounts of time.” Dr. Russell Blaylock, an expert on the problem of overabundant glutamate (called “excitotoxicity”) has suggested that excessive vaccination and use of aluminum adjuvants are part of an “immunoexcitotoxic” cascade he and others associate with food allergies, gut imbalances and autism. In fact, the scientific literature has firmly established that glutamate abnormalities are a key feature of autism. Thus, it should not be surprising that food allergies are much more common in children with versus those without autism, or that food anaphylaxis outcomes are worse when conditions such as asthma or other allergies are also present.

For its manufacture, polysorbate 80 relies on a variety of plant sources (including wheat and corn) as well as vegetable, legume and nut oils.

A Note About Polysorbate 80

The presence in numerous vaccines of a stabilizer called polysorbate 80 also warrants brief attention. Vaccines containing polysorbate 80 include those against hepatitis B, human papillomavirus (HPV), rotavirus, combination vaccines with a diphtheria-tetanus-pertussis component, virtually all influenza vaccines and others. For its manufacture, polysorbate 80 relies on a variety of plant sources (including wheat and corn) as well as vegetable, legume and nut oils. In a prior publication in 2015, one of the co-authors of the Pharmaceutical Research study reported the “impossibility” of guaranteeing that polysorbate-80-containing vaccines are free of “residual allergen proteins from these food sources,” noting that the “residual allergens that may be present…are not even listed in the vaccine package inserts.” A team of allergy experts recently asserted that hypersensitivity to polysorbates “may be underrecognized,” and a study in Brazil implicated another stabilizer called dextran in “hypersensitivity-type adverse events” associated with MMR vaccination.

Medical practitioners who continue to tell these families that they “don’t know what is causing the rise in food allergies” are being disingenuous or worse.

It should be noted that glyphosate is likely to be present in many of the plant sources used to produce polysorbate 80 and other vaccine components, either as a result of “Roundup Ready” crops (e.g., corn and soy) or through glyphosate’s use as a pre-harvest dessicant (e.g., wheat). Glyphosate’s documented ability to disrupt gut health suggests that its presence in food and vaccines could be contributing to the rise of food allergies, which are so completely intertwined with gut imbalances.

Living with food allergies is stressful, with the potential for significant emotional, social and financial impacts. Parents describe “living in fear” and having difficulty leading an “ordinary” family life. Medical practitioners who continue to tell these families that they “don’t know what is causing the rise in food allergies” are being disingenuous or worse. If Nobel Laureate Charles Richet could demonstrate  over a century ago “that injecting a protein into animals or humans causes immune system sensitization to that protein”—this is what the author of the 2015 paper calls the “Richet allergy model”—then there is no excuse for depicting the food allergy epidemic as an unsolved mystery.

Sign up for free news and updates from Robert F. Kennedy, Jr. and the Children’s Health Defense.