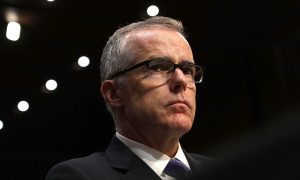 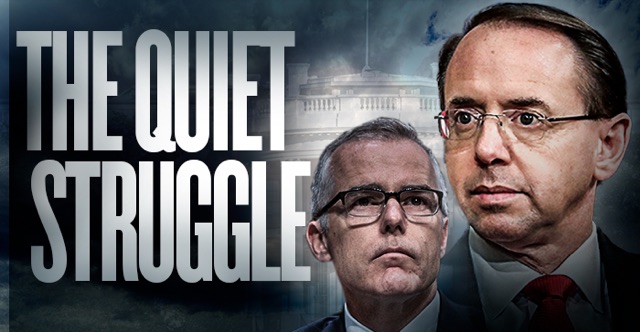 Nine Days in May: The Quiet Struggle Between Rosenstein and McCabe

On Dec. 7, 2018, CNN published an article discussing events in the eight days following the May 9, 2017, firing of former FBI Director James Comey by President Donald Trump. Comey was fired after a recommendation letter written by Deputy Attorney General Rod Rosenstein, titled Restoring Public Confidence in the FBI, was delivered to the president.

The CNN article was a rehash of two prior articles from the New York Times and the Washington Post that claimed Rosenstein had discussed wiretapping Trump, though CNN did provide increased emphasis on the fact that then-Acting FBI Director Andrew McCabe opened an obstruction of justice investigation into Trump in the days following Comey’s firing.

Left out of the CNN article, however, are a number of critical facts, not the least of which is that much of what was being described came from memos written by McCabe, who is now the focus of a grand jury investigation.

The actual sequence of events is far more interesting and provides evidence that may result in a different outcome than the one hinted at by many in the media.

Comey was fired on May 9, 2017. Two days later, on May 11, Acting FBI Director McCabe testified before the Senate Intelligence Committee. The hearing’s original intent was to focus on national security threats, but Comey’s firing substantially altered the topic of the hearings.

McCabe issued a passionate defense of Comey and agreed that he would notify the committee “of any effort to interfere with the FBI’s ongoing investigation into links between Russia and the Trump campaign.” McCabe also noted that there had been “no effort to impede our investigation to date.” In other words, McCabe testified that he saw no evidence of obstruction from President Trump or his administration.

Notably, McCabe failed to inform the committee that he was actively considering opening an obstruction of justice probe into President Trump—a matter he would aggressively push in a meeting with Rosenstein just five days later.

During McCabe’s testimony on May 11, an unusual, and underreported, event took place approximately two hours into the hearing. The chair and co-chairs of the Senate Intelligence Committee, Sen. Richard Burr (R-N.C.) and Sen. Mark Warner (D-V.A.), abruptly excused themselves from the hearing to attend a meeting with Rosenstein in an adjoining Sensitive Compartmented Information Facility (SCIF):

Burr: Before I turn to Senator Cotton, can I say for the members, the vice chair and I have to step out for a meeting that we can’t push off.

Present at this meeting were four individuals: Rosenstein, Burr, Warner and then-acting director of the DOJ’s national security division, Dana Boente, who is now the FBI’s general counsel. Boente was personally appointed by Trump as acting attorney general after Sally Yates was fired on Jan. 30, 2017. Boente also signed the second renewal of the Carter Page FISA application on April 7, 2017. Rosenstein would sign the third and final FISA renewal on June 29, 2017.

Worth asking: What was so pressing that it required the chair and co-chair of the Senate committee to suddenly depart from the hearing proceedings. NPR reported that “the meeting had been requested prior to Comey’s dismissal and that it was to ‘set up a process for deconfliction’ between the FBI investigation into Russia and the intelligence committee’s own independent probe.”

This explanation appears somewhat inadequate given that the hearing on national security had also been planned prior to Comey’s dismissal. It is not known with any certainty what was discussed, but Rosenstein and Boente felt the meeting was urgent enough to hold it in the midst of McCabe’s testimony.

For the last six months, DOJ Official Bruce Ohr had been communicating with former MI6 agent and author of the Steele dossier, Christopher Steele. Ohr became the conduit between Steele, Fusion GPS, and the FBI after Steele was formally terminated by the Bureau in late October or early November 2016. Ohr, a career official with the DOJ for many years, occupied the position directly below Rosenstein, who had only recently been appointed as deputy attorney general. Rosenstein was nominated by Trump for the position and was sworn in by Attorney General Jeff Sessions on April 26, 2017.

Ohr had been transmitting his communications with Steele through a series of interviews with the FBI that were documented in FD-302s, which serve as summarizing memos. The meetings between the FBI and Ohr came to an abrupt halt on May 15, 2017.

In the week following his firing, Comey leaked some memos of his interactions with the president to his friend, Daniel Richman. The leaks occurred on May 15 or 16, 2017. Comey would later state he did so with the intention of forcing the appointment of a special counsel.

On the morning of May 16, 2017, Rosenstein reportedly suggested to Acting FBI Director McCabe that he secretly record Trump. This remark was reported in a New York Times article that was sourced from memos from the now-fired McCabe. Rosenstein immediately issued a statement denying the accusations.

An unnamed participant at the meeting, in comments to The Washington Post, framed the conversation somewhat differently, noting that Rosenstein responded sarcastically to McCabe, saying, “What do you want to do, Andy, wire the president?”

The alleged comments by Rosenstein occurred at a meeting where McCabe was “pushing for the Justice Department to open an investigation into the president.” Note that just five days earlier, McCabe had publicly testified that there was no obstruction, stating “there has been no effort to impede our investigation to date.”

Following Rosenstein’s meeting with McCabe, Trump met with former FBI Director Robert Mueller, reportedly as an interview for the FBI Director job. It appears that Rosenstein was present at that meeting as well.

President Trump, in an interview with the New York Times said this about the meeting:

We still don’t know what was actually said at the meeting between Mueller, Rosenstein, and Trump.

On May 17, 2017, the day after Trump’s meeting with Mueller—and the day after Rosenstein’s encounter with McCabe—Rosenstein appointed Mueller as special counsel.

The conflicting words and actions of McCabe cannot be overlooked. On the one hand McCabe testified there was no obstruction from Trump, yet, just five days later, McCabe was attempting to convince Rosenstein to go along with his efforts to open an obstruction investigation into the president. Events suggest that McCabe’s efforts were met with alarm from Rosenstein, who responded by appointing Mueller as special counsel. Rosenstein may have also informed Trump of McCabe’s intentions.

The May 17 appointment of Mueller accomplished one very significant thing. It shifted control of the Russia Investigation from the FBI and McCabe to Mueller. Rosenstein would retain ultimate authority over the probe, and any expansion of Mueller’s investigation required authorization from Rosenstein.

Five days after McCabe lied to the IG, on Aug. 2, 2017, Rosenstein secretly issued Mueller a revised Scope of Investigation & Definition of Authority memo that remains heavily redacted. The full purpose of this Memo remains unknown and few have seen the unredacted version. On this same day, Christopher Wray was named the new FBI director.

On Aug. 4, 2017, AG Sessions announced the formation of a newly established Leak Task Force. Rosenstein and Wray were tasked with overseeing all leak investigations.

One individual who has seen an unredacted version of the Aug. 2 Rosenstein memo is U.S. District Judge T.S. Ellis III, who presided over the trial of Paul Manafort. Ellis, who received a copy of the memo on May 17, 2018, later made the following comment in a subsequent ruling:

“The record makes clear that the Acting Attorney General [Rosenstein] has required the Special Counsel to consult with the Acting Attorney General before investigating matters that might fall under the May 17 Appointment Order. Specifically, the August 2 Scope Memorandum identifies specific factual matters to be investigated by the Special Counsel.”

Acting Attorney General Matthew Whitaker, who recently assumed authority over the special counsel investigation, has also seen the unredacted memo. Like Judge Ellis, Whitaker has shown no indication he has any issue with the contents of Rosenstein’s memo.

Rosenstein remains in his position as Deputy Attorney General.

During a White House celebration of Hanukkah on Dec. 6, 2018, Trump specifically called out to Rosenstein, who was one of the attendees:

Trump: Why? He’s entitled to a much better location than that. Thank you Rod, very much.

Words do not adequately convey the warmth and enthusiasm from President Trump. The short exchange can be found here at the 1:35 minute mark.

During a June 28, 2018, sworn testimony before Congress, Rosenstein addressed his signing of the Page FISA:

“We sit down with a team of attorneys from the Department of Justice. All of whom review that and provide a briefing for us about what’s in it. And I’ve reviewed that one in some detail, and I can tell you the information that’s public about that doesn’t match with my understanding of the one that I signed, but I think it’s appropriate to let the Inspector General complete that investigation. These are serious allegations. I don’t do the investigation—I’m not the affiant. I’m reviewing the finished product.

If the Inspector General finds that I did something wrong then I’ll respect that judgment, but I think it is highly, highly unlikely given the way the process works.”

On Dec. 6, 2018, Chairman of the House Intelligence Committee Devin Nunes discussed the FISA signing issue during a Fox News segment: