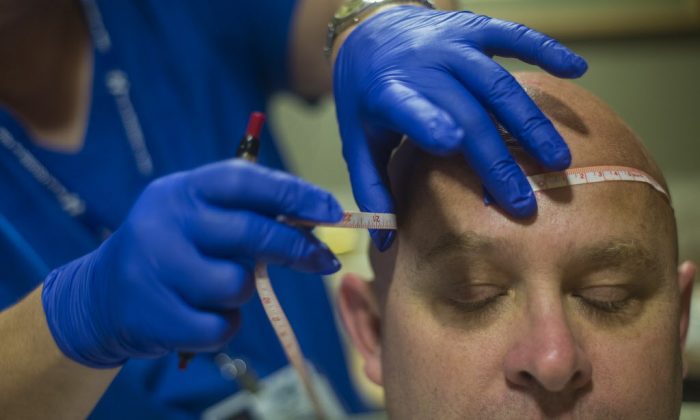 He spends his nights making sure products are up to his company’s standards for size, labeling and packaging, he said.

Miller has worked this third shift for 14 years, Sunday through Thursday, with a 7-mile commute.

He gets about five to six hours of sleep every day, he said, and he’s not complaining. By working night shifts, Miller has his days free to spend time running errands or working on his farm, he said.

But the night shift comes with downsides—ones that Miller and many of the other 15 million night shift workers across the United States know well, according to the Bureau of Labor Statistics. Some around south central Pennsylvania, though, have found ways to combat the rigorous mental and physical tolls their night-owl hours have on their health.

Humans are wired to sleep at night and stay awake during the day. When work schedules interfere with that rhythm, a person may never fully adjust to the switch, according to the National Institutes of Health.

Third-shift workers also have to fight the fact that most of society is day-oriented. As they try to sleep, they have to deal not only with environmental light but also noises like telephones, lawn mowers and more from the first-shift people around them.

These factors can cause extreme tiredness, which can correlate with a decreased quality of life, increased risk of accidents at work and decreased productivity, according to the National Institutes of Health.

The degree to which this fatigue affects workers varies by person.

Rene Najera, a current Hanover area resident, worked as a night-shift laboratory technician from 2000 to 2007, collecting blood samples and conducting tests at Waynesboro Hospital. He managed his schedule fine, he said, until he added a full-time course load at George Washington University in Washington, D.C.

That was when he found his body struggling to stay awake.

His schedule consisted of working nights, sleeping on the metro he took to school in the morning, finding the library to take a nap for an hour between classes and wearing big headphones to drown out any sound, he said.

“My sleep was fragmented,” Najera said. “I was exhausted.”

During slow nights at work, Najera would be tempted to take a nap. He played the radio, caught up on homework or visited other departments to stay awake, he said.

But others are better able to adjust to the third-shift schedule.

“It’s all I’ve ever worked,” Miller said. “I farm part time during the day, so it works perfectly.”

Before taking on the third shift at ESAB, Miller spent more than 20 years working 3 to 11 p.m.

“It was nice to get things done, but as far as social activities, that was limited on second shift,” Miller said. “The kids were just coming home from school when I left, and by the time I got home, everyone was in bed.”

“I could’ve bid on a day shift, but I like the third,” Miller said. “I have no problem staying awake; I enjoy it.”

When Miller’s shift ends at 5:30 a.m., he gets to sleep about an hour after, he said. But that wasn’t always the case.

Falling asleep posed a challenge when Miller first started third shift. He had no trouble functioning at work because he could move around and talk to people, but every now and then he needed a sedative from his pharmacy to get adequate rest at home, he said.

These kinds of over-the-counter remedies are sometimes helpful for people who have trouble fighting their natural sleep cycle, said Jamie Feeser, a registered sleep technologist at Hanover Hospital who has worked in the sleep field for 16 years.

Workers can also take non-medicinal measures at home to better prepare their bodies and environments for a good day’s sleep, Feeser said.

Feeser recommends keeping windows closed to block any outside noise, using earplugs and having a fan on to keep the room cool because daylight increases room temperature. She also recommends room-darkening curtains.

“Even when your eyes are closed, there are little receptors in our eyes that see light,” she said.

Night-shift workers should also limit their caffeine intake toward the end of their shifts so it doesn’t affect their ability to fall asleep and try to eat nutritious foods, Feeser said.

Lack of sleep combined with poor nutrition can lead to conditions like high blood pressure and high blood sugar, which increase the risk for heart disease and other health problems, such as diabetes, Feeser said.

Healthy eating can pose a major challenge for third-shift workers.

Najera, for example, depended on microwavable and fast foods, he said.

“Nutrition was not a priority,” Najera said. “During my days off I’d be sleeping and wouldn’t have the stamina to get up and cook something.”

Feeser suggests preparing meals ahead of time and taking them to work. If night-shift workers feel the need to buy pre-packaged meals, they can become label readers, checking the sodium and sugar content of their meals, she said.

“Ultimately, you have to find out what works for you with food,” Feeser said.

Home sleep-improvement methods can only do so much. If lack of sleep affects workers’ day-to-day lives, Feeser said, they should see a doctor.

That’s what Daniel Gullickson did earlier this year.

Like Miller, Gullickson works at ESAB Welding and Cutting Products, where he serves as a rewinder, wiring spools to be used by customers. When Gullickson first started at ESAB four years ago, he was on the 6 p.m. to 6 a.m. night shift, he said. Then he switched to day shift, only to be put on his current night schedule from 11 p.m. to 7 a.m.

“I personally didn’t realize I wasn’t sleeping well,” Gullickson said. “My wife told me I was snoring excessively and would stop breathing.”

Doctors have several tools for helping patients identify and treat sleep issues. They might help them create sleep diaries and schedules, or they can prescribe stimulants or sleeping pills, Feeser said.

For Gullickson, the first step was a sleep study.

A visit to his endocrinologist regarding another medical condition led Gullickson to get a test for sleep apnea, he said. Sleep apnea is a common disorder in which people have pauses in breath or shallow breathing when sleeping, according to the National Institutes of Health.

Doctors then study the patient’s brain waves, heart rate, breathing and leg movements during a six- to seven-hour sleep, Feeser said. Depending on the result, they might then prescribe behavioral therapy or medication.

Gullickson’s test found that he did have sleep apnea. Doctors believe his night-shift schedule may have been a contributing factor in the condition.

After a subsequent test, doctors prescribed him a machine that sends air pressure through a mask to help him breath better while he sleeps.

Gullickson is looking forward to finally having a good day’s rest before work.

“I can’t even remember the last time I had a dream,” he said. “I’d just like to have one.”