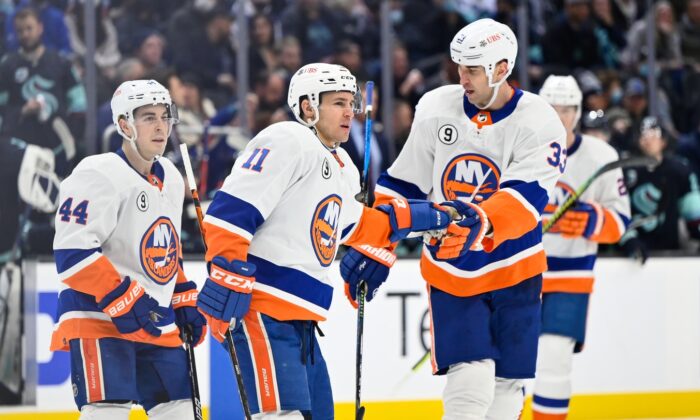 Zach Parise scored twice as the visiting Islanders cruised to a 5–2 win over the Seattle Kraken on a milestone night for New York defenseman Zdeno Chara.

Brock Nelson, Parise, Kyle Palmieri and Casey Cizikas all scored in the first two periods for the Islanders, who won for just the second time in six games. New York goalie Ilya Sorokin made 23 saves.

The assist on Parise’s late empty-net goal went to Chara, who played in his 1,651st career game—tying him with Chris Chelios for the most games played by a defenseman in NHL history.

Laine netted his 18th of the season from the slot on a pass from Jakub Voracek. Brendan Gaunce and Adam Boqvist also scored for the Blue Jackets, who have won eight of their past 10 games. Zach Werenski added two assists, and Jean-Francois Berube made 39 saves.

Jason Spezza tied the game for Toronto at 17:54 of the third period with goaltender Jack Campbell removed for an extra attacker. Auston Matthews had a goal and two assists and Michael Bunting had a goal and an assist for the Maple Leafs, who have lost three straight. Campbell made 26 saves.

Granlund’s game-winner came with 5:31 remaining, giving Nashville its first lead after it had tied the score three times. Filip Forsberg, Roman Josi and Yakov Trenin also scored for Nashville, which got 44 saves from David Rittich.

Sam Reinhart, Radko Gudas, Aaron Ekblad and Sam Bennett scored for the Panthers, who saw their nine-game home winning streak come to an end and lost for just the fourth time in 27 home games this season. Sergei Bobrovsky stopped 27 shots.

Ivan Barbashev had a goal and an assist to lift St. Louis past host Philadelphia.

Brayden Schenn, Vladimir Tarasenko and Brandon Saad each added one goal while Niko Mikkola contributed two assists for the Blues, who won for the fourth time in five games. Jordan Binnington made 25 saves.

Oskar Lindblom scored for the Flyers, who have dropped six in a row (0-4-2) and three straight (0-2-1) to start their eight-game homestand. Goaltender Martin Jones received the start for the second consecutive game because Carter Hart was out with an eye infection, and he stopped 22 shots.

Defenseman Thomas Chabot collected two goals and an assist in his return from a four-game absence, fueling Ottawa to a victory over visiting Minnesota on Tuesday.

Chabot, who had been sidelined by an undisclosed injury, scored the eventual winning goal with 5:45 remaining. Tim Stutzle scored in his third consecutive contest, captain Brady Tkachuk also tallied and Anton Forsberg made 40 saves to help the Senators snap a nine-game skid (0-7-2) against the Wild.

Kevin Fiala recorded a goal and an assist for the Wild, who have lost three of their last four games. Captain Jared Spurgeon and fellow defenseman Jon Merrill also scored for Minnesota.

Rickard Rakell scored two goals in regulation and added the game-winner in a shootout as Anaheim returned home to earn a victory over San Jose.

Derek Grant also scored a goal as the Ducks won at home for the first time since Jan. 21 after playing eight of the previous nine games on the road. Anthony Stolarz made 40 saves in a rare start in place of John Gibson.

Trevor Zegras scored in the shootout for Anaheim before Rakell’s close-range shot into the roof of the goal in the third round ended the game. San Jose’s James Reimer recorded 26 saves.