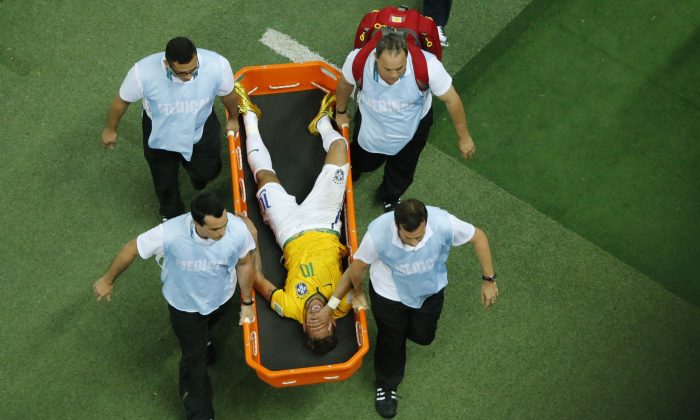 Brazil's forward Neymar (C) reacts in pain as he is carried on a stretcher after being injured during the quarter-final football match between Brazil and Colombia at the Castelao Stadium in Fortaleza during the 2014 FIFA World Cup on July 4, 2014. (FABRIZIO BENSCH/AFP/Getty Images)
Soccer

Neymar Spine: Brazil Star Fractures Vertebrae After Getting Hurt in a Foul; Will Miss Rest of World Cup 2014

Neymar’s World Cup is over after injuring his spine against Colombia.

The Brazilian star was stretchered off the pitch in the 88h minute after being kneed in the back by Juan Camilo Zuniga.

Neymar was seen holding his face and crying in pain as he was taken off the field.

Brazil’s latest poster boy was reportedly taken to Sao Paolo Hospital, although coach Luiz Felipe Scolari has since said that Neymar was taken to a private clinic.

According to BBC Sport, Neymar’s World Cup is over as he has fractured a vertebrae.

Football Guy Mowbray tweeted out that it was the “3rd vertebrae” that Neymar fractured.

Brazil team doctor Rodrigo Lasmar assessed Neymar, and confirmed that the striker is out of the World Cup.

“It is a benign fracture,” Lasmar said to TV Bandeirantes.

“This news is not easy, but he will not be available at this World Cup.”

“The fracture does not require surgery. There will be a conservative treatment; [he] needs comfort to ease the pain.”

Brazil Wins, But May Have Lost Neymar for Semis

FORTALEZA, Brazil (AP) — With or without Neymar on the field, Brazil will play Germany for a spot in the World Cup final.

The host nation advanced to the semifinals for the first time in 12 years on Friday, beating Colombia 2-1 with the goals coming from defenders Thiago Silva and David Luiz.

But the celebration was quickly tempered when Brazil coach Luiz Felipe Scolari said Neymar, the poster boy of this year’s World Cup, could miss the semifinals because of injury.

“We don’t know the exact extent of the injury yet, but I can guarantee that it won’t be easy for him to recover,” Brazil coach Luiz Felipe Scolari said. “I think that for the match against Germany it will be very difficult for Neymar to play, based on what I talked about with the doctor.

Neymar has been the focal point of both the Brazilian team and the entire World Cup, and he lived up to expectations with four goals in the first three matches.

But he took a knee to the back late in the match against Colombia at the Arena Castelao in a collision with Juan Camilo Zuniga. The Brazilian star was crying in pain as he was carried off the field, and was taken to a private clinic.

“Along with the rest of Brazil I’m hoping for the recovery of our greatest player,” Brazilian player Dilma Rousseff wrote on Twitter.

Brazil will definitely be without Silva for Tuesday’s match against Germany in Belo Horizonte. The captain must sit out after getting his second yellow card of the tournament for impeding Colombia goalkeeper David Ospina.

Luiz added the second from a free kick in the 69th, sending a swerving long-range shot off the inside of his foot and into the top of the net.

Rodriguez tried to control the pace of the match, but it was Brazil that created most of the scoring chances as Ospina had to make a series of saves in the first half alone.

The Colombians tried to pressure after Rodriguez’s late penalty, but Brazil held on with solid defending.

“This is a very tough moment for us,” Colombia coach Jose Pekerman said. “We always had the dream of winning this match even though we knew Brazil would be a very tough opponent. We knew how decisive this was, and that any mistake would cost us.”

Colombia was coming off four straight wins, playing some of the most impressive football of the tournament. And the Colombians, playing in the quarterfinals for the first time, had entered the match after scoring 11 goals, second only to the Netherlands.

“After not playing in the World Cup for so long, we were able to show the value of the Colombian football and the talent of some of our players,” said Pekerman, an Argentine. “They showed great spirit and presence of mind. They came to play a great World Cup, not just to participate.”

There was a lot of talk about Rodriguez and Neymar before the match, but the 22-year-old forwards didn’t really deliver. Rodriguez scored the late penalty but was otherwise mostly ineffective, as was Neymar before he left on a stretcher.