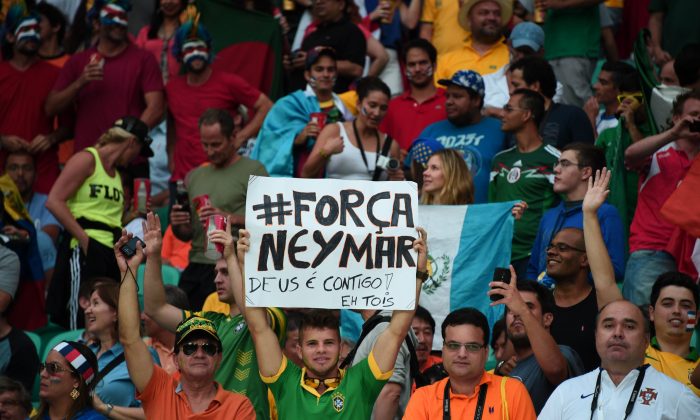 A Brazil's supporter holds a banner (reading : 'Be Strong Neymar, God is with You and Everybody') during a quarter-final football match between Netherlands and Costa Rica at the Fonte Nova Arena in Salvador during the 2014 FIFA World Cup on July 5, 2014. (DAMIEN MEYER/AFP/Getty Images)
Soccer

The Brazil team and fans are still confident that they can win the World Cup without their injured star player.

Neymar was stretchered off the field in tears, and “screamed in pain in the dressing room,” He was taken to a hospital for tests, and the team doctor, Jose Luiz Runco, judged that it would take 45 days before Neymar can get back in action.

The length of time that Neymar will be sidelined effectively rules him out of the World Cup, which ends on July 13.

“He was extremely moved when I gave him the news that he was out of the World Cup,” Runco said.

“He cried a lot, which was a natural reaction at that moment.

“But I told him that although his dream was being cut short, he was still a 22-year-old with a lot in front of him.”

The Brazil football team is, however, still confident that they can push on without their star player.

Brazil defender David Luiz, who scored a superb free kick against Colombia to ensure Brazil’s progression in the World Cup said, “We have to try to be mature in a moment like this.

“We are sad because we are missing an important player and someone who was trying to fulfill his dream of winning this title.”

“It’s sad because we know how hard he worked to be here with us,” striker Fred added.

“We know how important he was for us. But we have to look at our group and realize that it still has a lot of quality.”

Coach Luiz Felipe Scolari will have a tough time in the semi final against a resurgent Germany, especially because he lost his captain and key center back Thiago Silva to a suspension.

Silva remains upbeat, however, and said, “We don’t know who is going to come in, but we know that we have a lot of quality players in our squad,”

“We are sad for Neymar and because I’m not going to play, but we have to be prepared despite these absences.”

Dr Runco also thinks that Neymar’s injury will bring the group together and motivate them to win.

“I think this will help make this group become stronger, it will motivate them to reach the final and win the title,” the doctor said.

“They will want to honor this teammate who always helped the team.”

Brazil’s greatest player of all time also had something to say about Neymar’s situation and his many years back.

“I was also injured during the 1962 World Cup in Chile, and I was out for the rest of the tournament,” Pele said.

“But God helped Brazil continue on to win the championship.”

Likewise, the Brazilian fans are confident of their team’s chances.