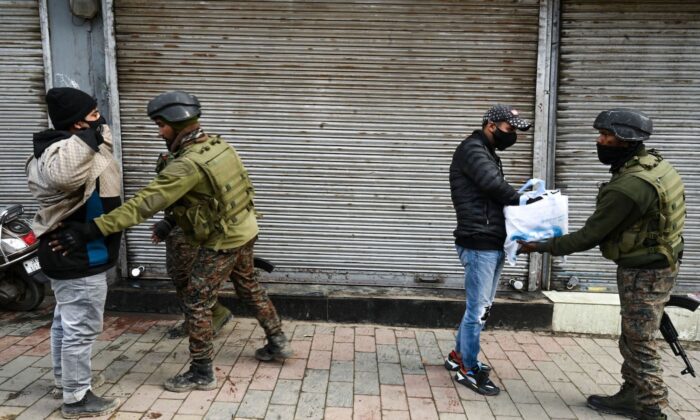 A prominent news editor in Indian-administered Kashmir was arrested on Friday for allegedly “glorifying terrorism” and “instigating people,” police said.

Fahad Shah, the founding editor of The Kashmir Walla, was detained from the southern Kashmiri city of Pulwama on Friday night after being summoned for questioning.

Shah has been placed in 10-day police custody, the privately-owned news site said in a statement, adding that the editor had been “bed-ridden” and was on medication for severe cough and fever since Jan. 31.

“The team stands in solidarity with Shah and his family at this time of distress and remains committed to providing reliable and on-ground reporting from Kashmir and appeals to Manoj Sinha-led Jammu and Kashmir for the immediate release of Shah and Gul,” it said.

According to the Committee to Protect Journalists (CPJ), Shah had been called in for questioning on Feb. 1 over the site’s coverage of a gunfight between militants and government forces in late January.

Four suspected rebels were killed in a gunfight in Pulwama on Jan. 30, including 17-year-old Inayat Ahmad Mir, whom the police described as a “hybrid militant.” The Kashmir Walla interviewed Inayat’s family, who claimed that he was an innocent teenager and pleaded with the authorities to return his body.

The police in a statement carried out by local media said Shah was among some Facebook users who have been “uploading anti-national content” with “criminal intention to create fear among the public.”

It claimed that the uploaded content was “tantamount to glorifying the terrorist activities and causing dent to the image of law enforcing agencies besides causing ill-will [and] disaffection against the country.”

Police chief Vijay Kumar was quoted by The Kashmir Walla saying: “Accused Fahad Shah has been arrested on the basis one of the three [first information reports] lodged against him for frequently glorifying terrorism, spreading fake news, [and] instigating people, for the past 3-4 years.”

Another journalist who worked for The Kashmir Walla, Sajad Gul, was detained last month under the Public Safety Act and still remains in jail.

Steven Butler, CPJ’s Asia program coordinator, has also called for the immediate release of Shah and called the arrest “utter disregard for press freedom and the fundamental right of journalists to report freely and safely.”

“Authorities must immediately release Shah, and all other journalists behind bars, and cease detaining and harassing journalists for simply doing their jobs,” Butler said in a statement.

CPJ claimed that it had contacted Kashmir Police Director-General Dilbag Singh and Pulwama Police Senior Superintendent Ghulam Geelani several times regarding the arrest but had received no responses.